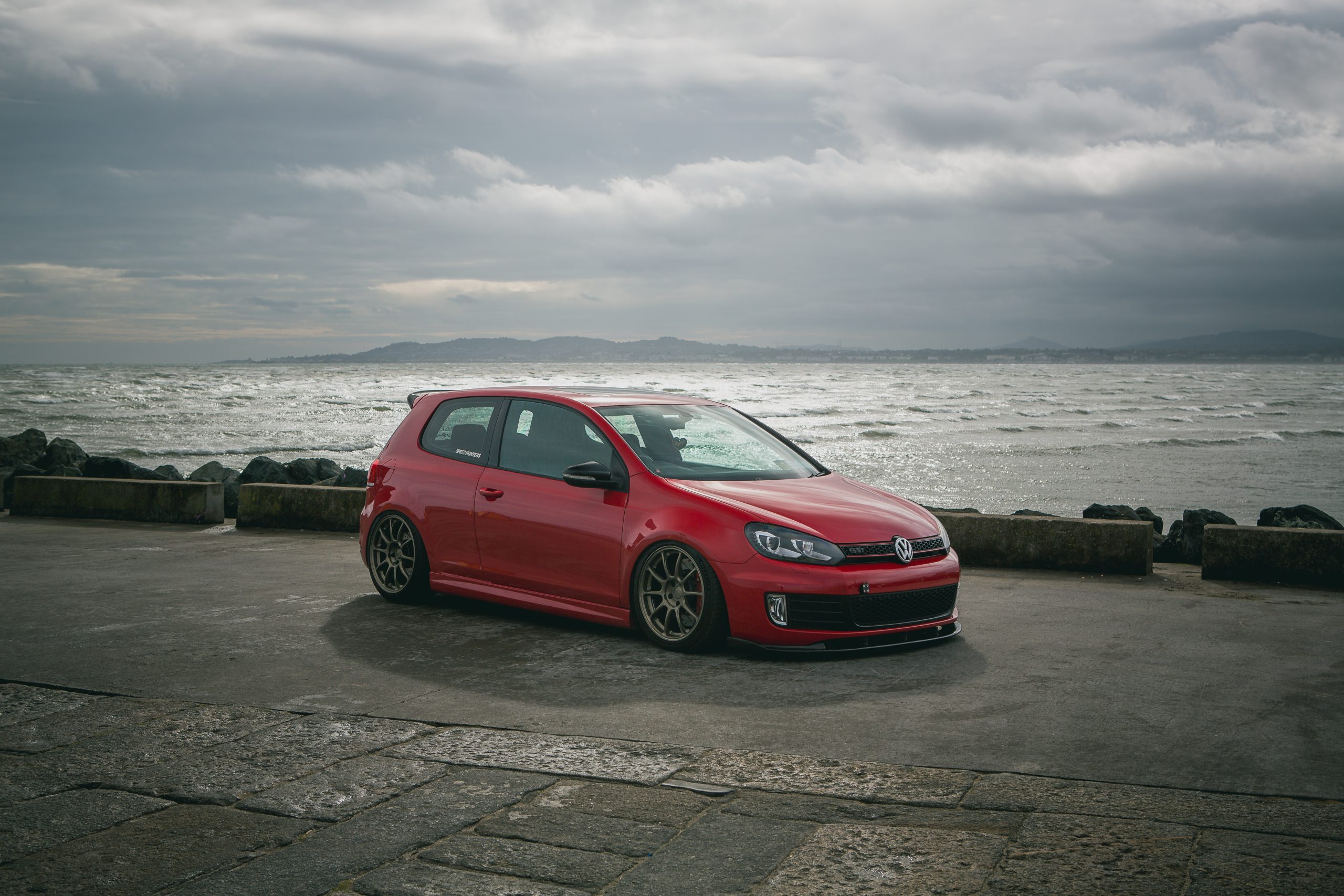 #taroxgenerations – An Illustrious Partnership With The VW Golf GTI

#taroxgenerations – An Illustrious Partnership With The VW Golf GTI

With a rich heritage stretching back to 1976, TAROX has become synonymous with providing performance braking solutions for many different generations of cars – including the much-loved Golf GTI…

With a passion for performance, our engineers have always been quick to spot the potential with new vehicles and consequently, TAROX is often first to market with new products. The relationship with the Golf GTI has been one of the most enduring in the company’s rich history.

When the original GTI was launched at the 1975 Geneva Motor Show, it broke the mould. Back then, there was no such thing as a ‘hot-hatch’. You either bought a family saloon or a rear-wheel drive sports car. The front wheel drive Golf changed everything. Here was a vehicle that was good looking, practical, affordable and, most importantly, fun to drive. The wheel at each corner layout, lively 1.6-litre engine and finely balanced chassis made it a big hit with enthusiast drivers. Of course, as with any production vehicle, there were areas that could be improved upon. 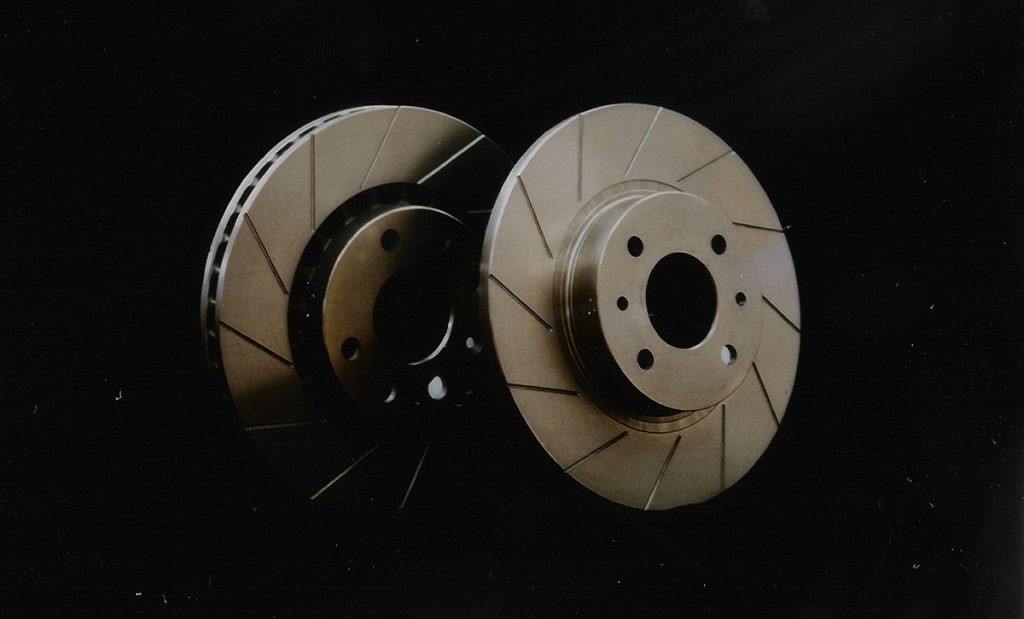 The first ever grooved disc. Just in time for the first Golf GTI

We launched our first grooved disc for the road in 1983 and the Mk1 Golf GTI was one of the most popular fitments. This performance setup delivered a harder bite, with improved pedal response, thanks to improved thermal resistance. In short, something that anyone who pushed their Golf harder on the road or track could rely upon. With the confidence to brake later into turns, knowing that the car would slow down effectively, drivers could really begin to exploit the playful nature of the Golf’s chassis. From a spirited B-road thrash, to hot laps of a circuit, the newly upgraded GTi was a revelation.

At the very beginning of Golf tuning

The Mk1 had a small, 239mm disc which could quickly overheat. The G88 40-groove brake discs do an outstanding job at removing the hot gases from the surface of the disc, allowing the car to be driven harder for longer. Combine with Strada pads perfect for B-road blasting.

The Mk2 Golf GTI, along with the Peugeot 205 GTI and Renault 5 GT Turbo, became one of the hot hatches to own in the late ’80s and early ’90s. A huge number were tuned and TAROX became synonymous with these cars. From the early 1983 1.8-litre 8V, to the last of the line, 1992 big-bumper models, the Mk2 was a big hit with enthusiasts. The amount of well-cared for original models and stunning resto-mod cars (often with engine swaps and all manner of OEM+ upgrades) present in today’s scene highlights just how loved these GTI’s are. 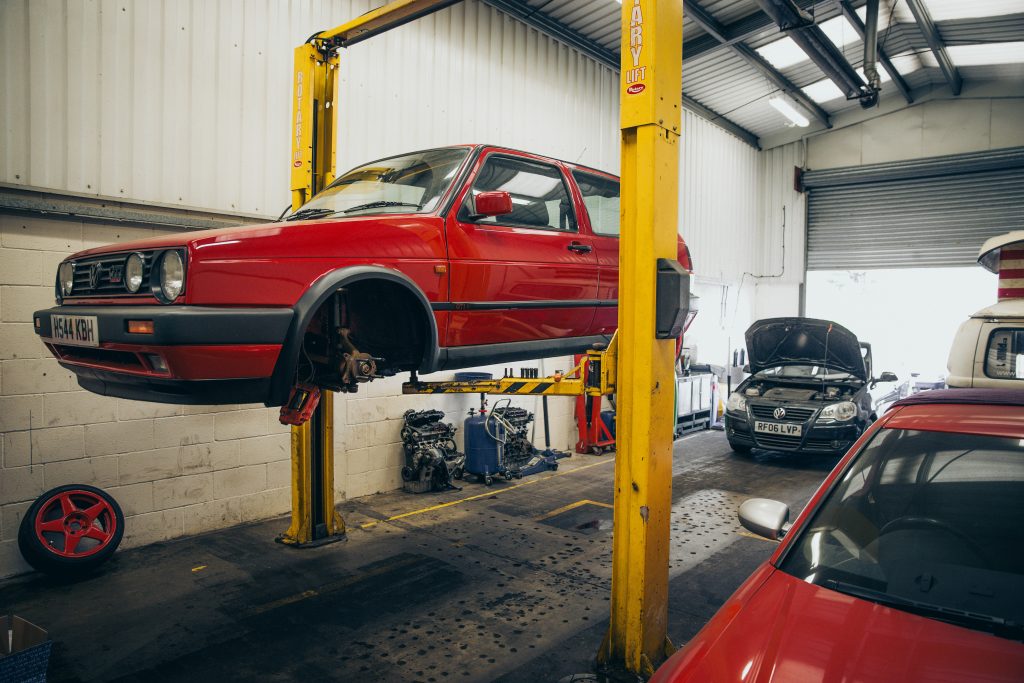 The Sport Compact Brake Kit features F2000 heat-treated and grooved, 280mm one-piece discs mated to a compact 6-piston caliper manufactured from billet alloy and hand assembled. Originally retailing for £650 and able to fit within the Mk2’s 15 inch wheel, the Sport Compact became one of the all time best sellers. 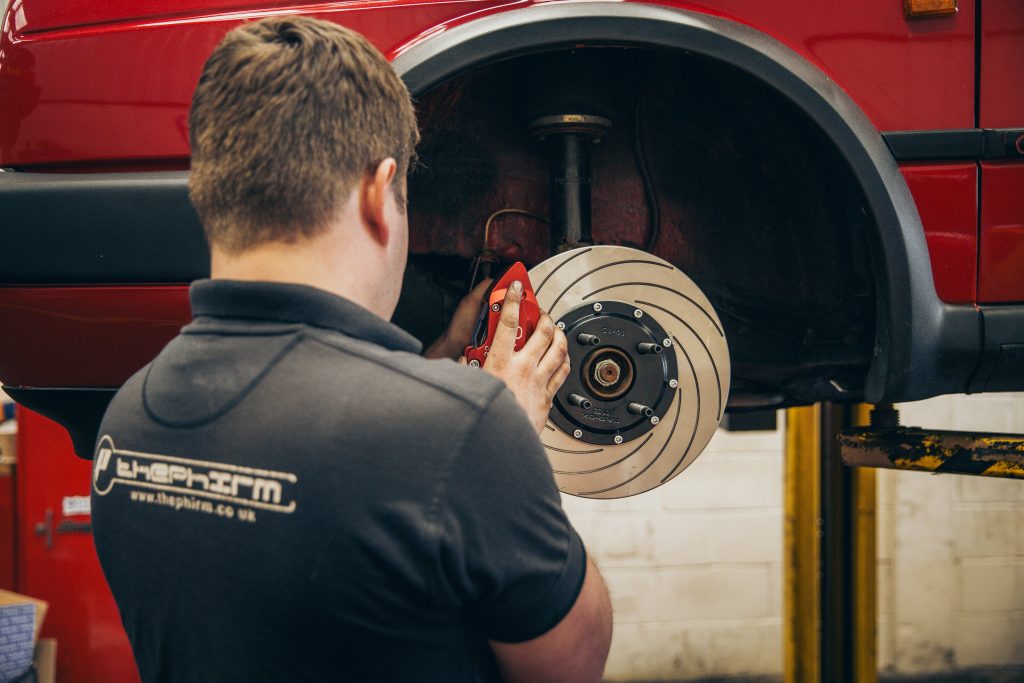 Launched in 1992, the new Golf GTI came with a larger 2.0-litre 8V engine producing 116hp. This was followed by the more punchy 150hp 16-valve model, which was the one to have. It was still unmistakably a Golf, but the styling had evolved – although the new oval headlights caused a bit of a stir amongst die hard Mk1 and Mk2 fans. Like the Mk2, TAROX was quick to begin development on uprated discs and pads, to allow owners to get the most from their Mk3 GTIs.

Part of the first ever brake systems built for road cars (and we don’t just mean TAROX, we mean EVER!). The 305mm 2-piece disc mated to our first ever 6-piston caliper the N6, which went on to be developed into the B32 and Sport brake systems which are still on sale today! Revolutionary in ’94, the beginning of a whole industry and way of tuning your car. 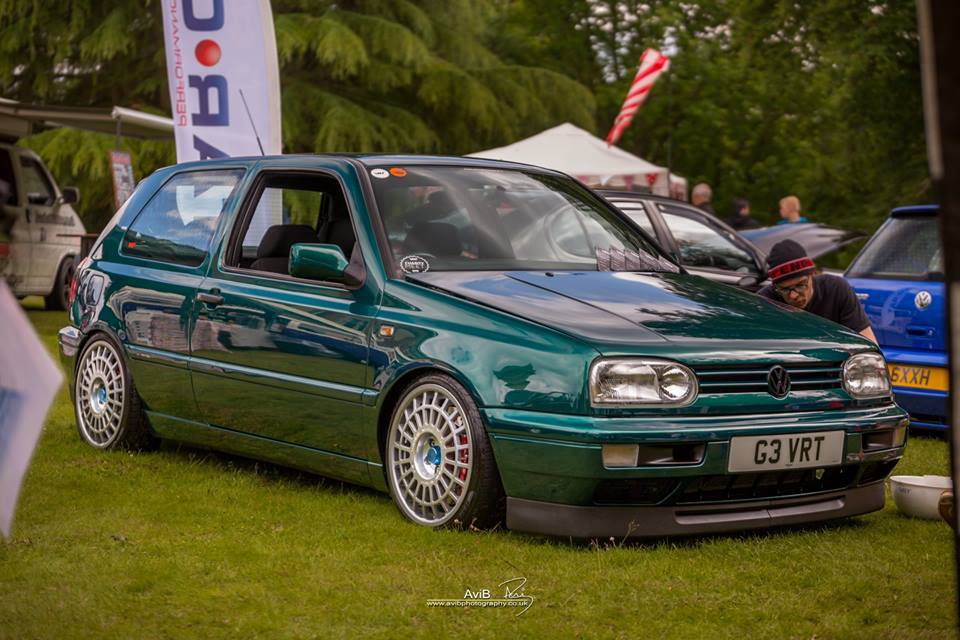 VR6’s ruled the roost on the Mk3 platform

With the launch of the Mk4 in 1997, it was clear that the Golf had put on some middle aged spread. Bigger, heavier and less engaging to drive than previous iterations, the naturally aspirated 2.0-litre lump struggled against some hot competition in the sector. However, VW improved things by dropping the soon to be ubiquitous 1.8T 20v unit into the Mk4 in 1998. With a solid 148bhp (177bhp in later Anniversary models), the first turbo-charged GTI paved the way for future generations of forced induction GTIs. 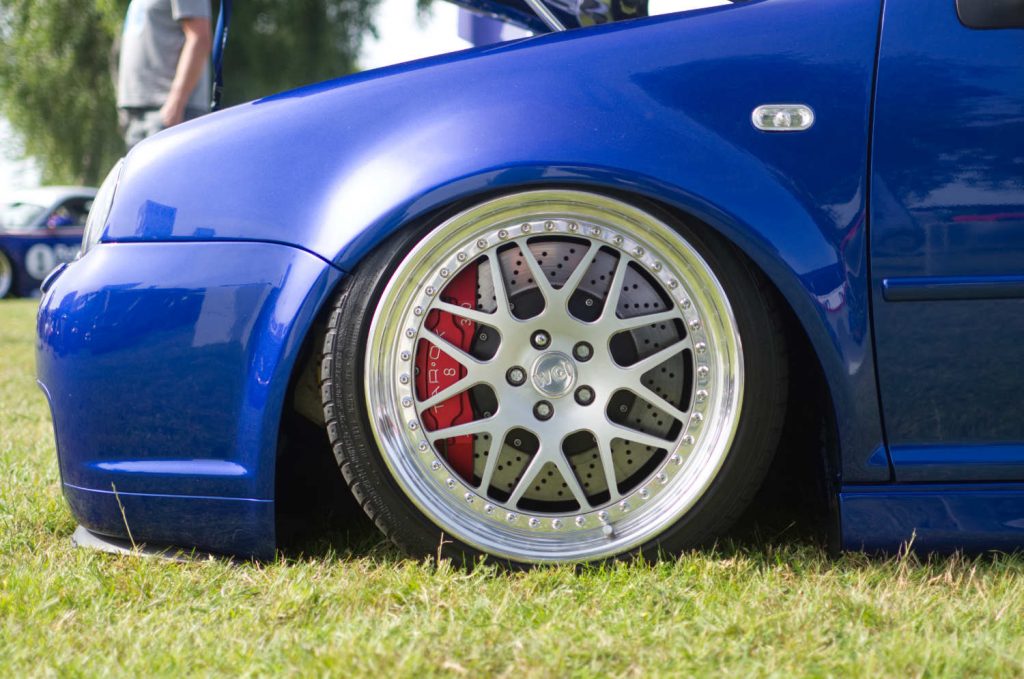 The ‘Scene’ takes over. The MK4 platform saw huge amounts of modifications

Most Mk4 Golfs came with an adequate 288mm disc but, as 1.8T tuning became more popular and power increase were easily obtained, tuners looked to the higher powered Audi S3 (8L) which came with the same caliper but a larger 312mm disc. The 312mm disc is one of the biggest selling parts in our 40-year history – we wonder how many are actually fitted to S3s over the world? 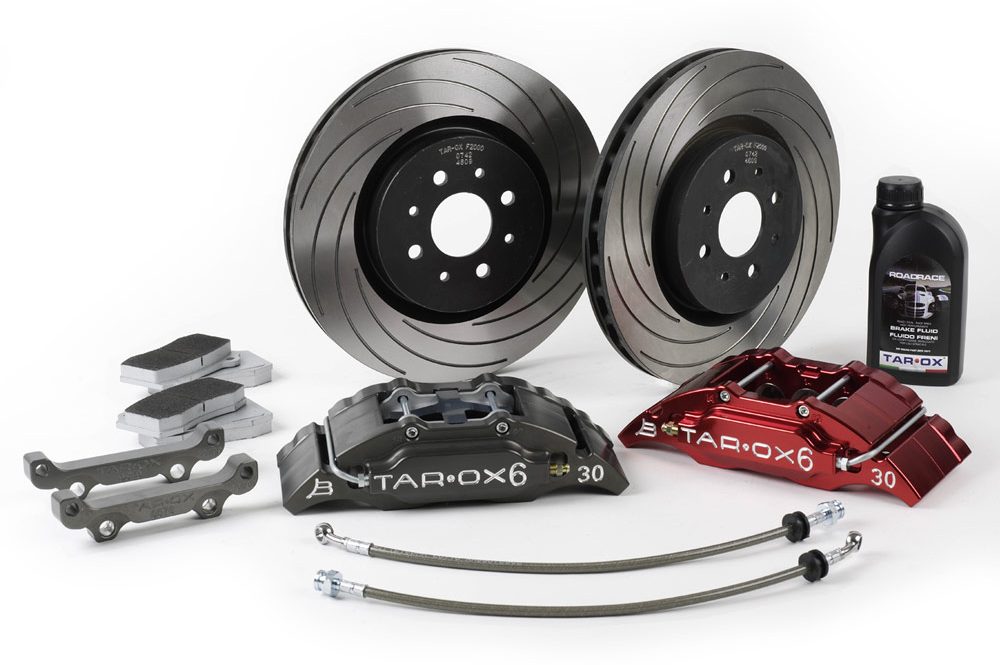 MK4 Sport Compact kit is one of the biggest selling of all time.

In 2003 the Mk5 GTI arrived and was greeted with universal praise. The all new car delivered on all levels – it looked good, it handled with aplomb and the new 199hp 2.0-litre TFSI turbo engine delivered plenty of performance. But it was the new twin-clutch DSG gearbox which really impressed people. Smooth shifting and potent acceleration meant you could really hussle the new GTI along – especially off the line. Added to this were several nods to the original Mk1 including tartan seats and the iconic golf ball gear knob. Aesthetics aside, it was the rekindling of the original GTI formula of gutsy engine and nimble front wheel drive handling that made it fun to drive, that made the Mk5 such a great car. 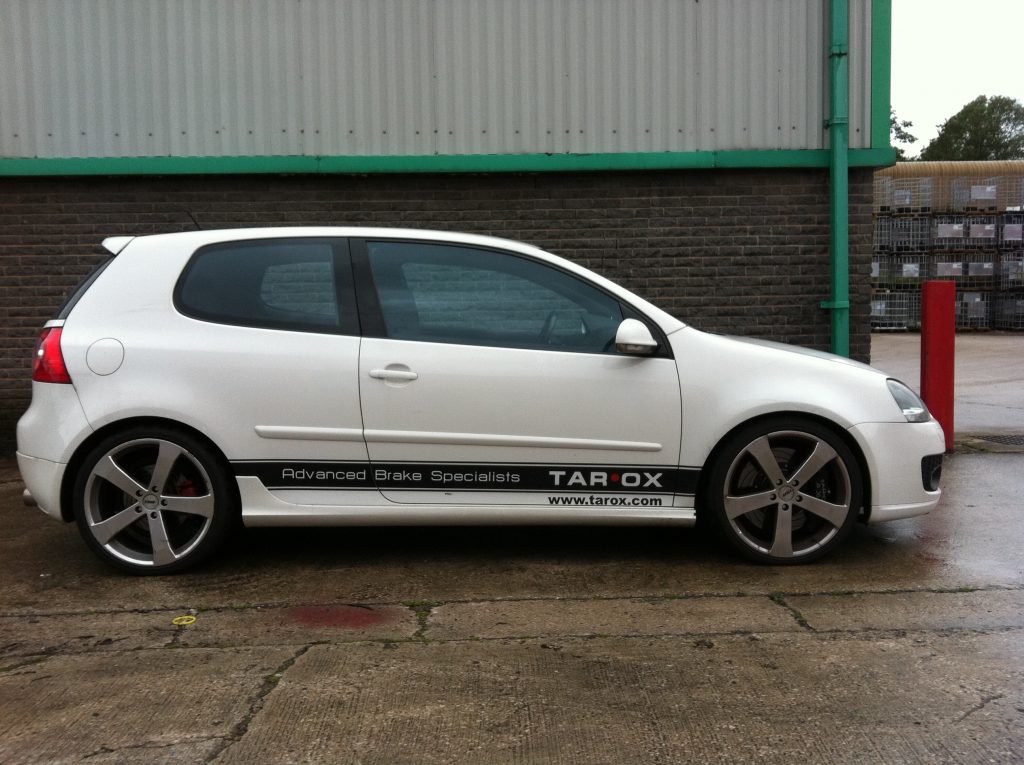 The MK5 changed the game so much,we had to have one.

Developed on our very own Mk5, the Sport Compact kit followed OEM+ cues and paired the 345mm disc found on the R32 with our B34GT caliper. The kit offered huge gains in performance at an attractive entry price for a TAROX kit. 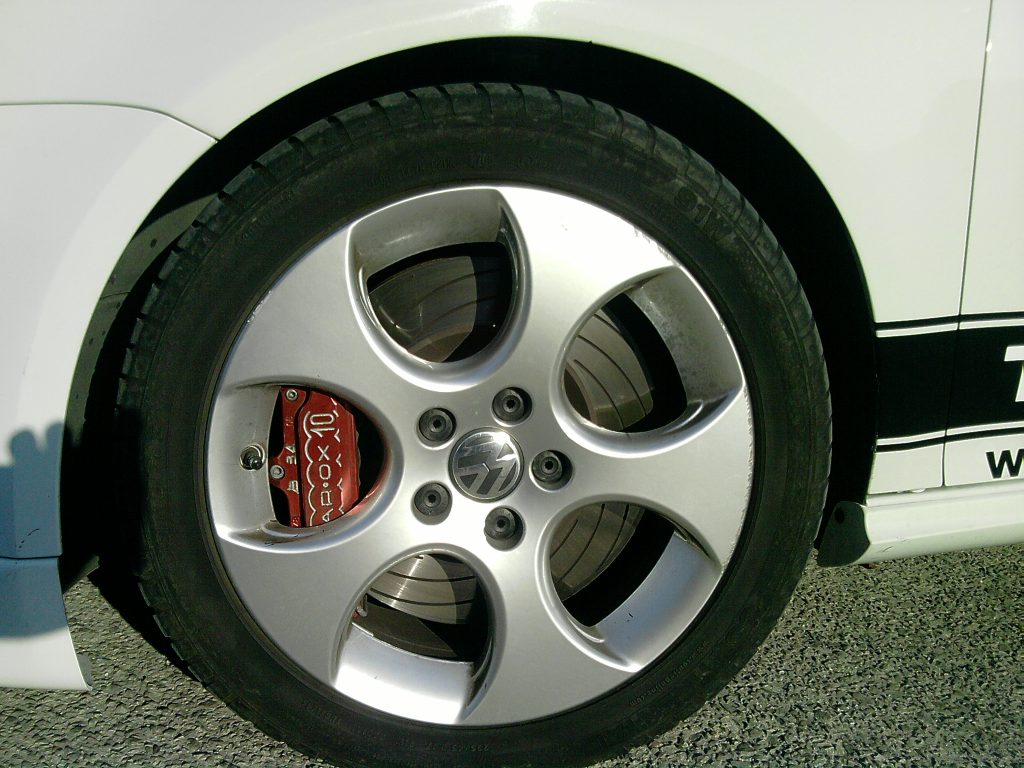 The evolution from Mk5 to Mk6 GTI was less pronounced than from Mk4 to Mk5; with the 2009 model further refining what was already a winning package. It added slightly more power with the revised 207hp 2.0-litre TSI engine, an improved chassis and an overall lift in quality, making the new car the most desirable so far. 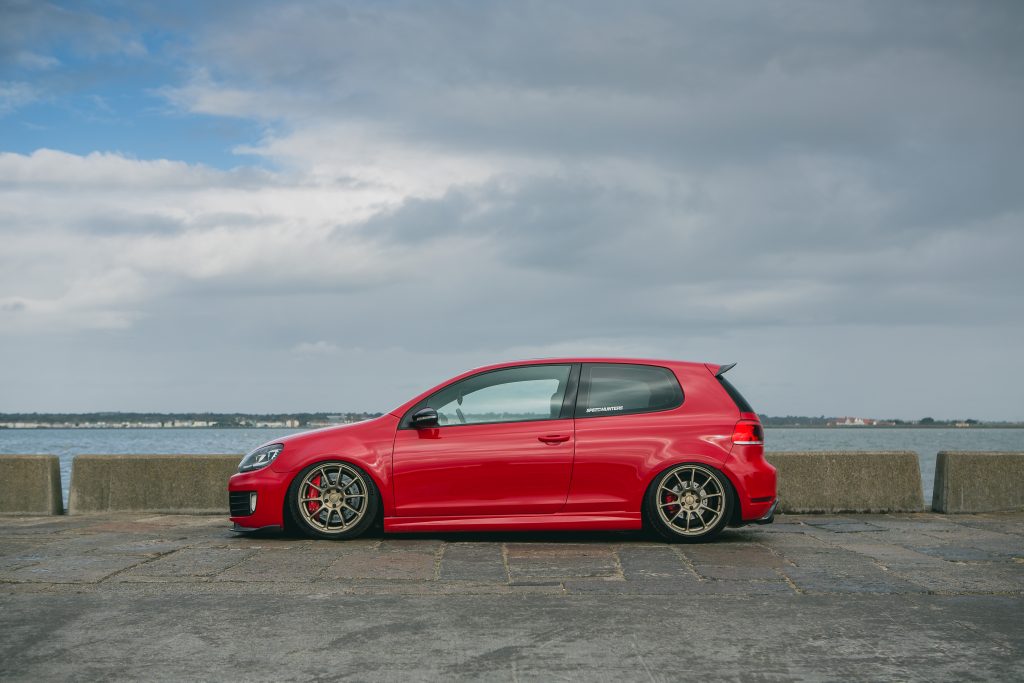 Our Super Sport brake system is recommended for big-turbo street cars, race cars and show cars. The 8-piston brake kit with 360mm two-piece discs can handle anything thrown at them. There are several options for colour, pad compound and discs styles, which all fit within the stock 18in wheels. 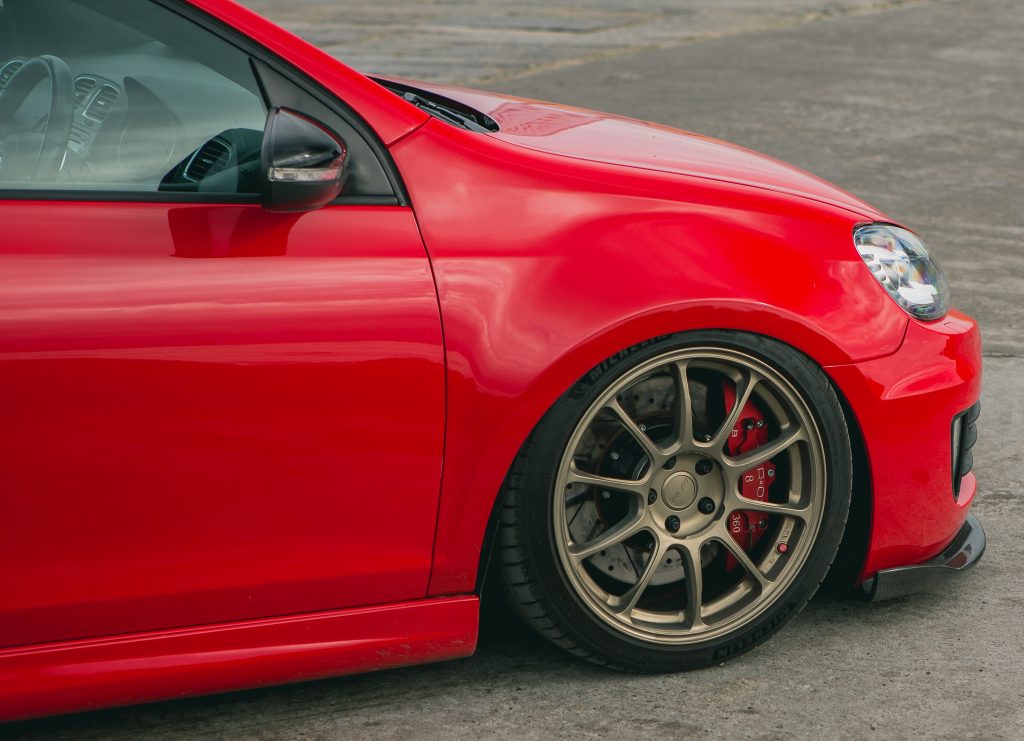 With the advent of the 2014 Mk7, the GTI improved once again. Utilising the ubiquitous MQB platform, the Mk7 featured the latest version of the 2.0 TSI unit, the EA888 Gen3. With 217hp and a top speed of 153mph, this was the final version of the Golf GTI to be available in three-door form and with a six-speed manual gearbox. In many ways, this is the ultimate spiritual successor to the original GTI. 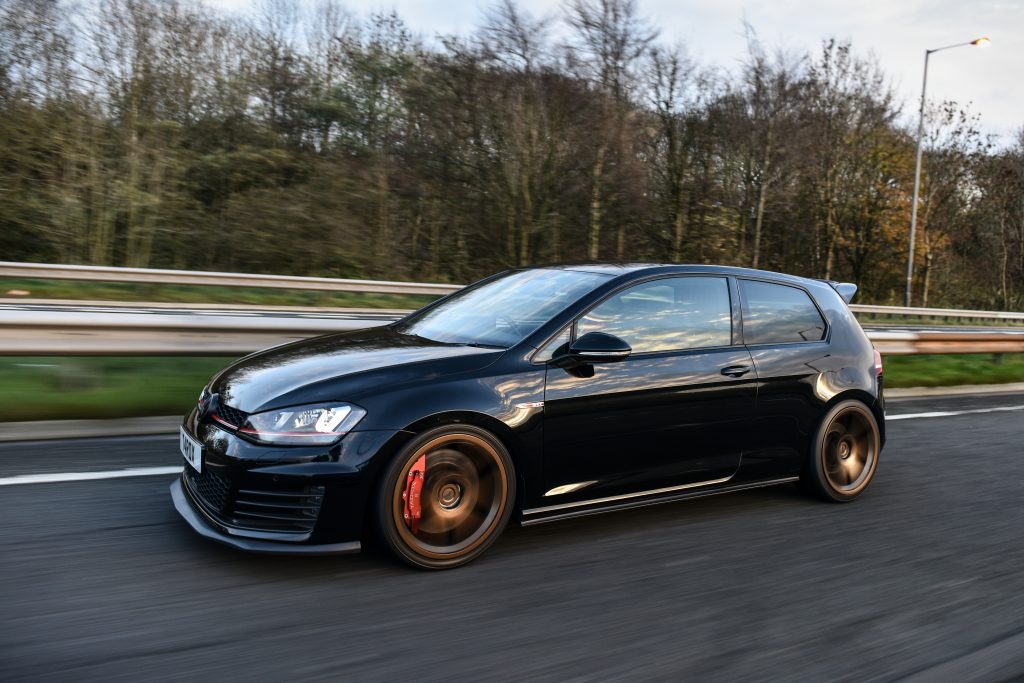 In 2017 the final version, the Mk7.5 arrived, this time in five-door and DSG guise only, setting the scene for future GTIs. Power had risen to 227hp (242hp with the Performance Pack upgrade) and as an all-round, premium performance car, it was one of the most accomplished.

Mk7 Performance Pack models use a red calliper and share a 340mm disc with the Golf R. The F2000 version of the 340mm disc paired with our Strada brake pad has become the go to for GTI and R owners alike, with more sets sold than any other product in the last 15 years. Both models inspire tuning and modification. For more on our own development of the Mk7 GTI, click here. 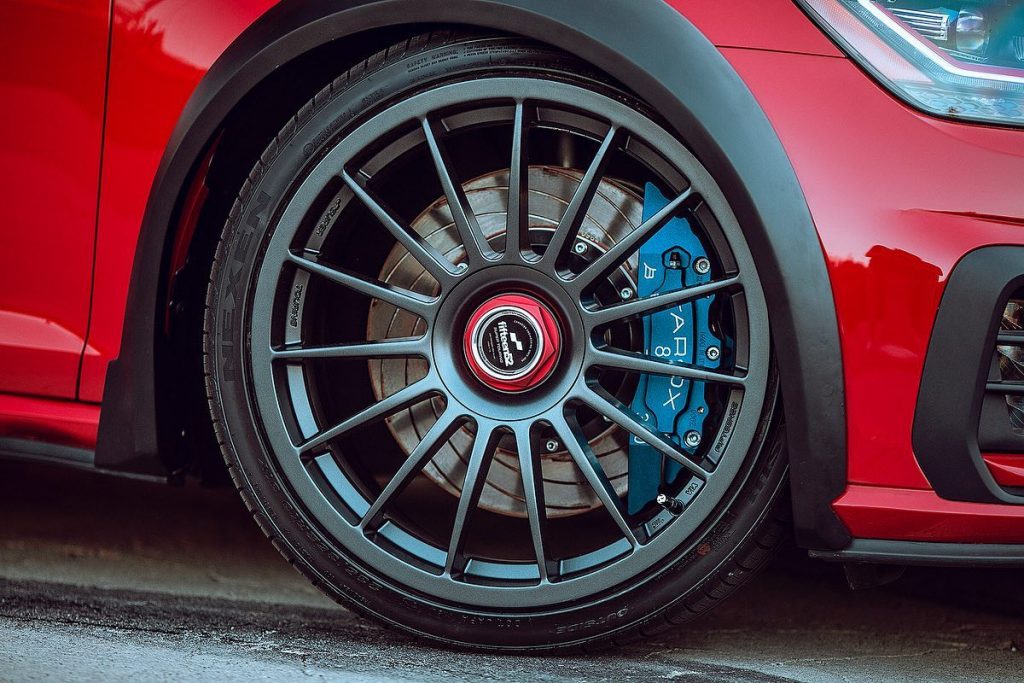 Although not currently available at the time of writing, the Mk8 Golf GTI is set to be the most accomplished version yet. Power has risen to a potent 242hp and the new model is packed with the latest technology, including a mild hybrid and touchscreen interior. The new “design language” (we used to call it styling!) has caused much debate – particularly those headlights, but there’s no doubt that the latest incarnation to wear the GTI badge will be a success. As has become the tradition, we have already developed a performance braking package for the Mk8. 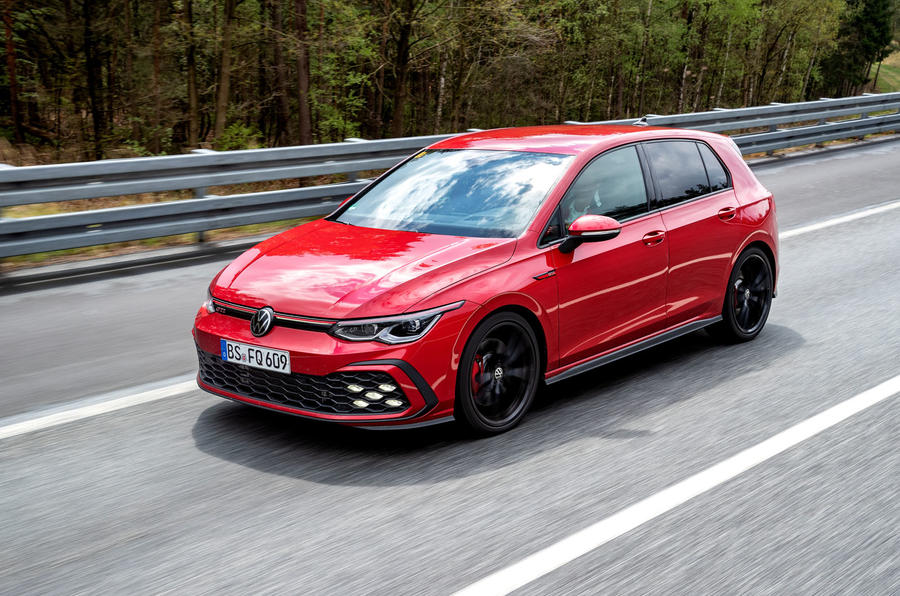 So there we have it, over 45 years of the Golf GTI, with more than two-million cars sold. From sporty, no-frills, practical hatchback, to a refined, premium performance car packed with technology – it’s been an impressive journey. We’re proud to have developed brake upgrades for each and every version of the GTI, all of which are still available today. So whether you need to replace your OEM discs and pads, or install a bespoke big-brake system, we have you covered.

The TAROX team are all avid Golf enthusiasts and have, between them, owned and tuned some stunning examples…

“The appeal to me of the Mk3 Golf was it had similar underpinnings to the mk2, but with the improved features of its generation. The VR6 with its low down grunt, and “that noise” made it the one for me. One of the shortfalls of the VR6 was that it had the same brakes as the slower and lighter 2.0 GTIs, so at the very minimum, you’d want to upgrade the discs and pads for a bit more confidence, and consider a kit if you’re planning to take the car on track regularly.” 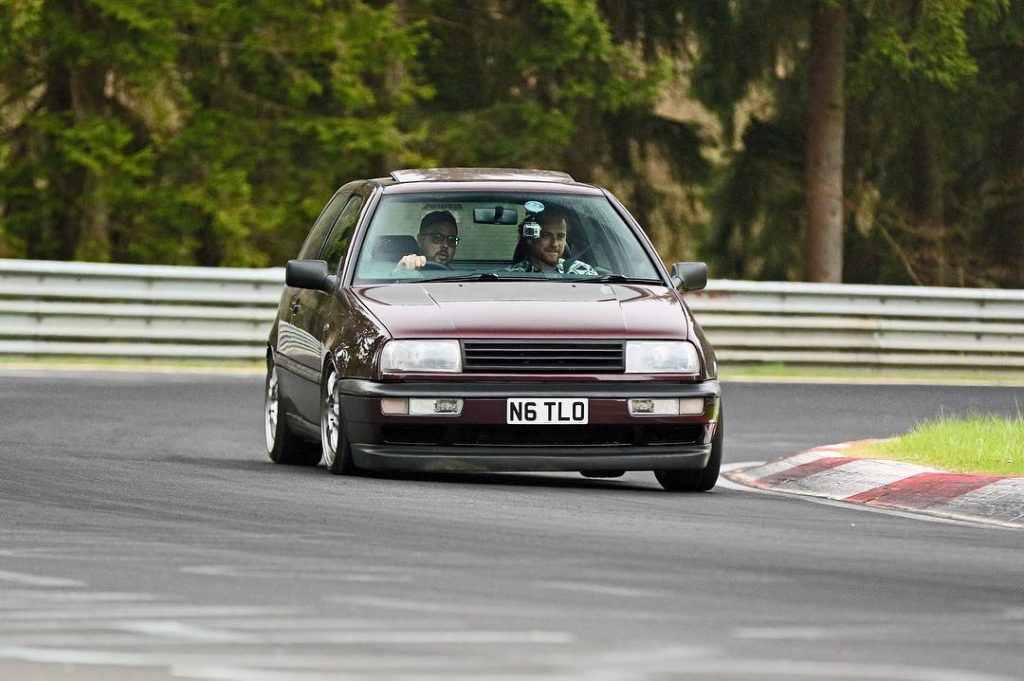 Paul’s VR6 now in the hands of Olly.

“For me, the Mk7 GTi is the pinnacle of GTI, so the Mk8 has some big shoes to fill. All the years of ups and downs culminate in a car that is a joy to spend time in and a riot to drive. The only option ticked when ordering the UK demo Mk7 was the Performance Pack. The first reason was the diff, which makes a lot of difference and the second was the bigger brakes which don’t. For two years with only gentle modifications and our SuperSport 8-piston system, the 7 dealt with track days, show and shine and delivering parts to customers perfectly; god I miss it.” 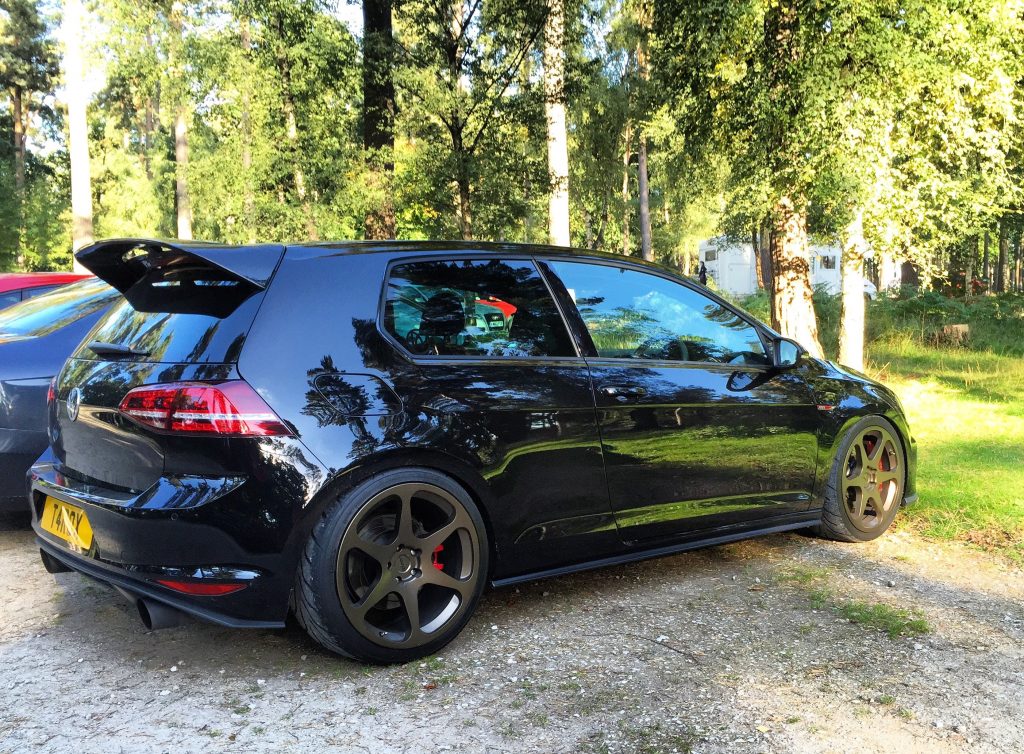 “Awesome Red is my forever car. I’ve owned four generations of GTI but I cannot bring myself to part with the Mk2. Driving it creates a sense of pride and a special feeling that none of the other generations have managed (yet). Despite not being my daily driver anymore and the car seeing limited mileage, it still sees the highest level of care and maintenance. Each one of the plethora of modifications/restorations has been meticulously considered, with only the best parts used.” 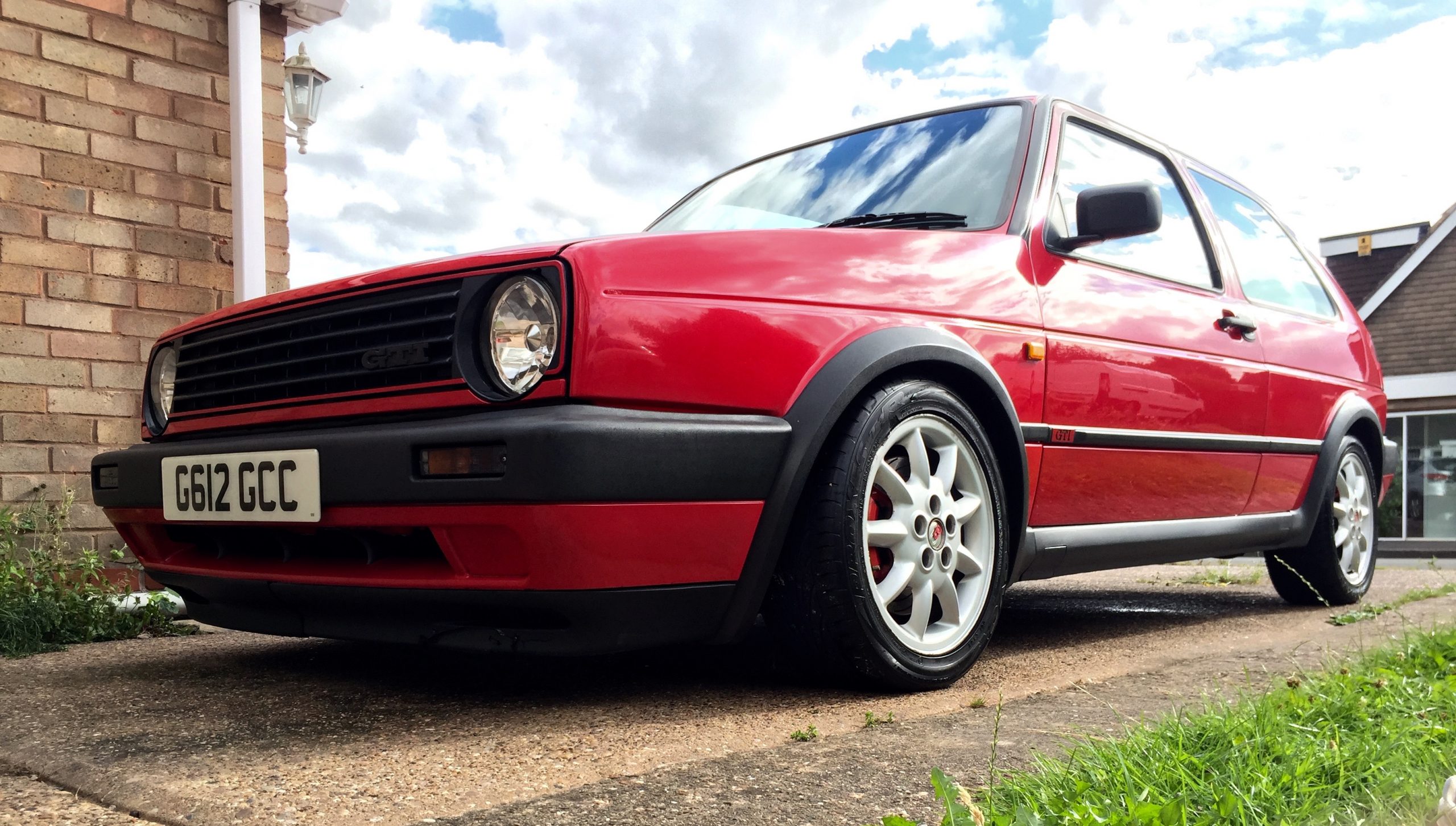 “When the Mk5 GTI appeared it signalled a definite change of pace, for better, compared to the earlier versions. In particular, the Mk5 GTI had brand new brakes and suspension, so it made sense to have one for long-term development work. In hindsight it was a good choice; it laid the foundations for the development of the Mk6 and Mk7 GTI.”

Valeria Taroni, TAROX owner on the future of the Golf and TAROX

“From TAROX’s point of view the VW Golf is a benchmark and it’s definitely a priority to offer an upgrade package for any new version. It goes without saying the MK8 will not be an exception.” 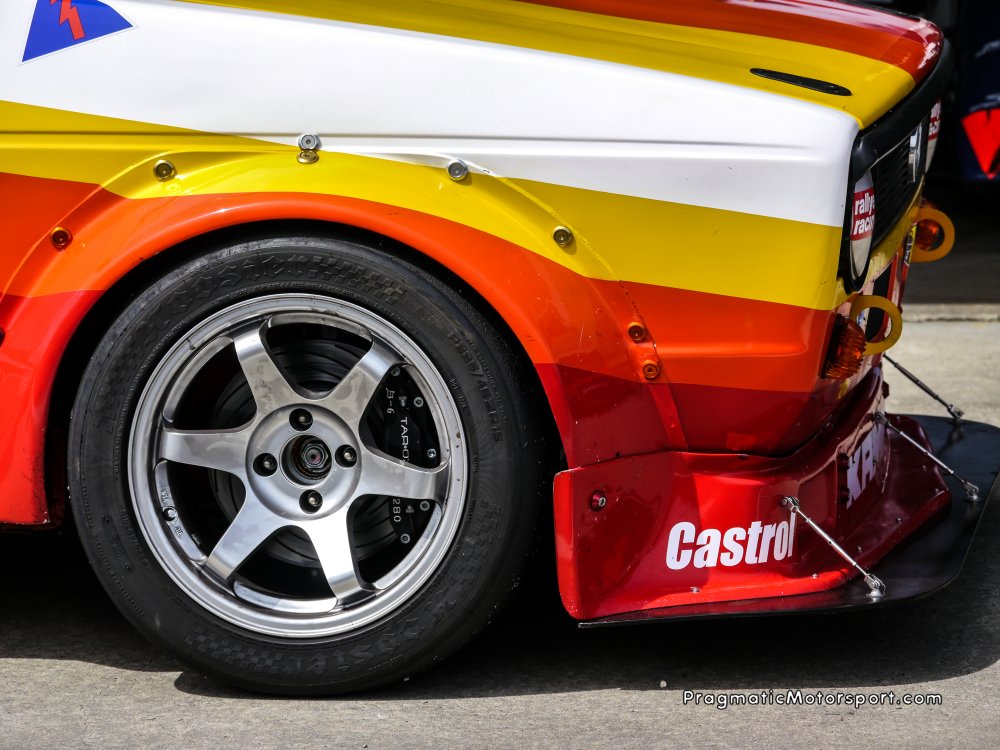 And back to where it all began.

One common theme throughout our history with Golf GTI’s as well as the rest of our VAG range is our key collaborator and close friends in Manchester Awesome GTI.  From supplying cars for development, to all the tuning work done on our own demo cars, our range would not be what it is without them! So a big thanks to Mark, John and all the staff past and present. 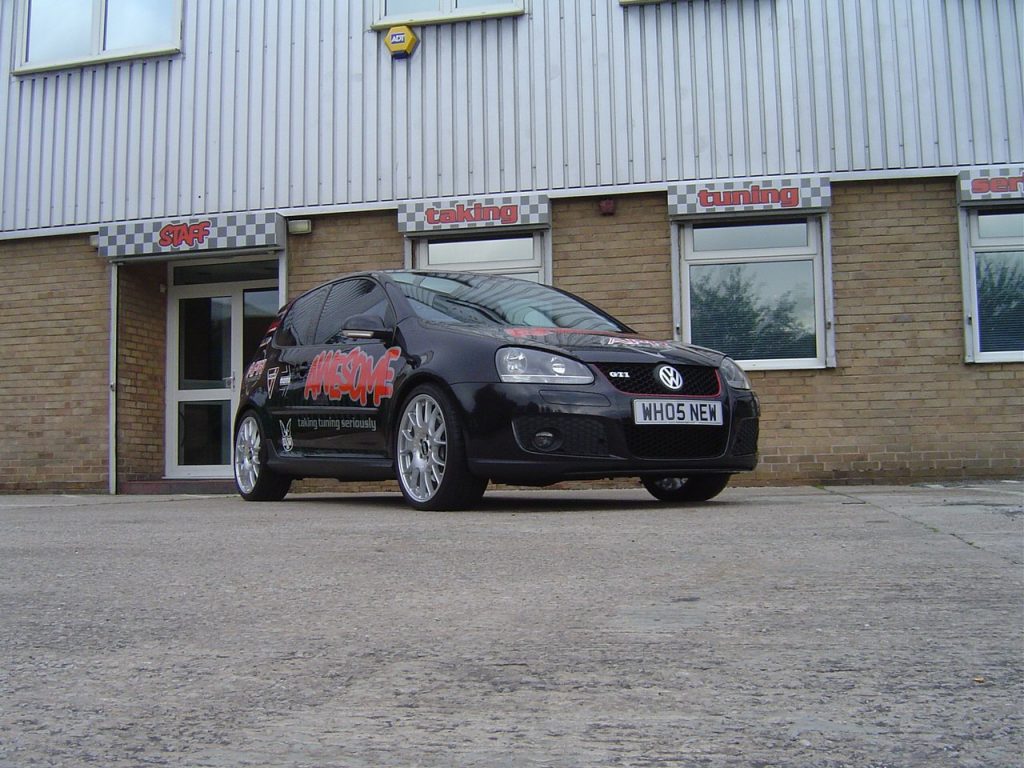