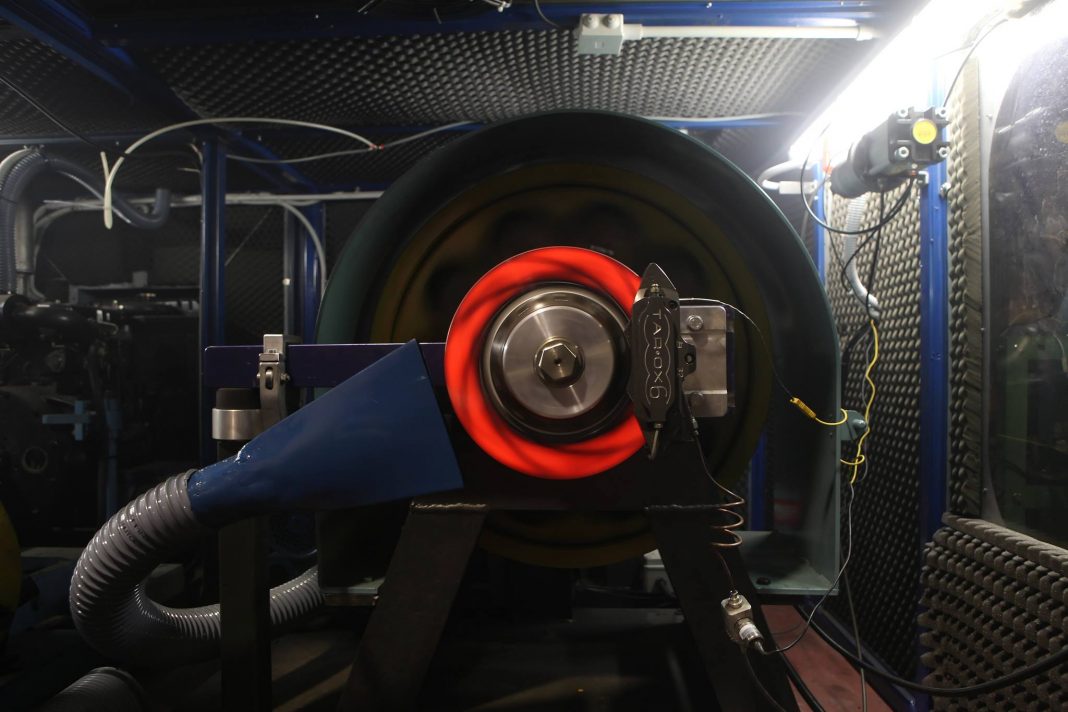 Five-minute expert: Everything you need to know about TÜV (and other certifications)

Five-minute expert: Everything you need to know about TÜV (and other certifications)

If you’ve ever spotted the TÜV logo on a car part and wondered what it means, then you’ve come to the right place. We’ve put together an easy-to-follow guide explaining TÜV and the other relevant certifications relating to aftermarket car parts. So, grab yourself a brew, and prepare to learn everything you need to know – if nothing else you’ll be able to impress your mates with your expert knowledge! 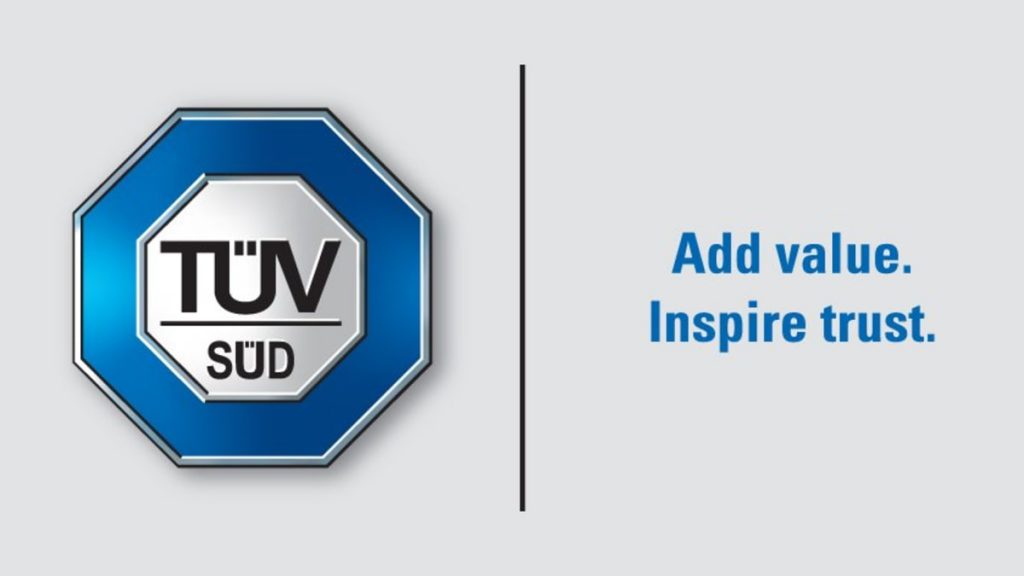 What types of certification are there?

First up, we have to separate company certifications (how seriously a company takes its internal quality control) from product certifications (that demonstrate how rigorously it tests its products).

What is it? The IS0 9000 standard ensures that a company has a high level of internal quality control. This means it is: (a) committed to steady improvement of its products; (b) puts customer satisfaction first; (c) selects suppliers based only on quality criteria; (d) periodically reviews its performances. ISO 9000 is subject to annual audits and has to be renewed every three years. TAROX has been awarded ISO 9000 since 2004.

What’s important? A commitment to quality from the top level of company management is essential.

Anything to look out for? For some companies, it’s seen as nothing more than a badge to attract customers.

We say: ISO 9000 is an important indicator that a company really cares about quality.

What is it? Specifically aimed at the automotive industry, the KBA is issued by the German Federal Motor Transport Authority (Kraftfahrt-BundesAmt). It proves that a company has a quality control procedure that complies with German road traffic laws. ISO 9000 approval is required and it is renewed every three years, which includes an onsite audit. TAROX has been KBA-compliant since 2004.

What’s important? A comprehensive product recall plan is essential (although it’s hoped the company never needs to use it).

Anything to look out for? Despite being respected worldwide, it is still only a national certification.

We say: Focused on consistency of production and after sales care, a KBA is essential to get a product certified in Germany.

What is it? Probably the best known abbreviation for anyone buying aftermarket car parts, TÜV stands for Technischer Überwachungs Verein (Technical Inspection Association). It’s actually the most basic certification, where products are submitted to a test procedure, influenced by an EEC directive. It’s classed as “basic” because there are no other requirements (e.g. having an ISO 9000 certification), required to pass it. You just need to pass the test itself and pay for it. For brakes, the test consists of a series of consecutive stops at variable speeds with both a laden and unladen vehicle. TAROX received its first TÜV test report back in 2001. It approved all of the brake upgrade kits listed in the catalogue at the time, as well as both G88 and Sport Japan discs.

What’s important? Once you pass the first level there’s always the next one to aim for. (See TÜV Gutachten below).

Anything to look out for? Its degree of acceptance depends mostly on the person who carries out the periodic inspection of the car. 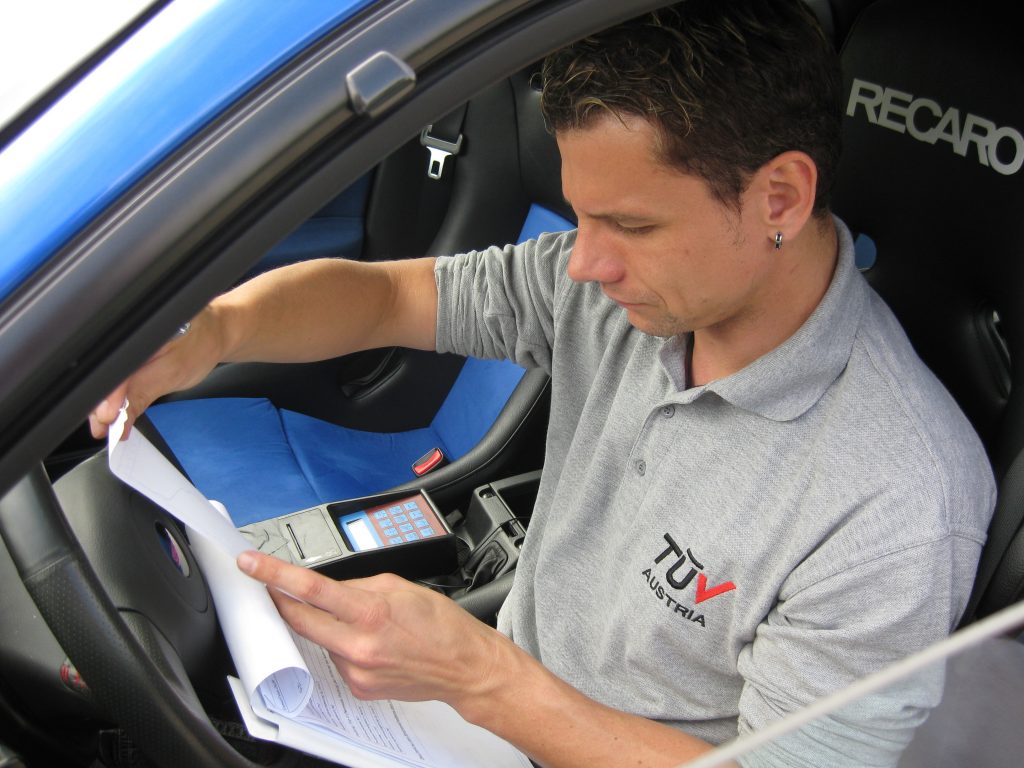 What is it? In force in Italy since 2010, it applies to aftermarket brake upgrade kits. It requires static tests of the calipers and road tests on the components fitted to the car. To have a product approved requires time and patience; TAROX started the procedure in December 2010 and didn’t receive the approval documents until 2014. The paperwork to receive an extension (i.e. to add more models to an already approved application list) may take up to a year.

What’s important? TAROX was the first company in Italy to achieve this type of homologation for brake systems and, so far, it is the only one.

Anything to look out for? It applies to cars registered in Italy only.

We say: In the ten years since it came into force, TAROX has not heard of any customers being stopped, or having their insurance withdrawn for installing a brake upgrade kit. 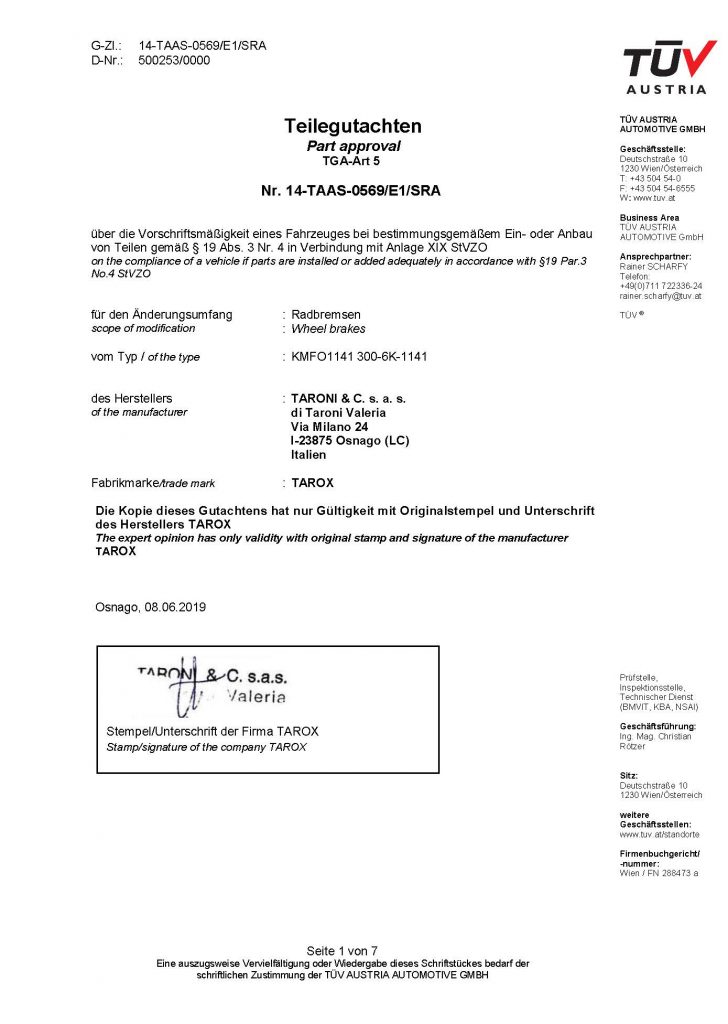 What is it? The next level of TÜV approval. It requires that a company already has an ISO 9000 certificate and has been approved by the German KBA. In the case of brakes, it’s common that the product needs to pass a test on a dyno and on the road. TÜV Gutachten covers brake kits, brake pads and brake discs (both single and two-piece). TAROX had its first TÜV Gutachten parts approved in 2012 and new applications are periodically added.

What’s important? Ford requested that all TAROX brake kits sold through their official Ford Performance dealers be TÜV Gutachten approved, illustrating how seriously it is considered.

Anything to look out for? The range of applications is usually strictly observed. So, if your car make and model is not included, it may not pass the inspection, even if the part in question is fully compatible.

We say: Extra test requirements add more weight to a certification. So, in any country that requires a product certification outside Germany (e.g. Spain, Belgium, Denmark, Norway), TÜV Gutachten is normally accepted. 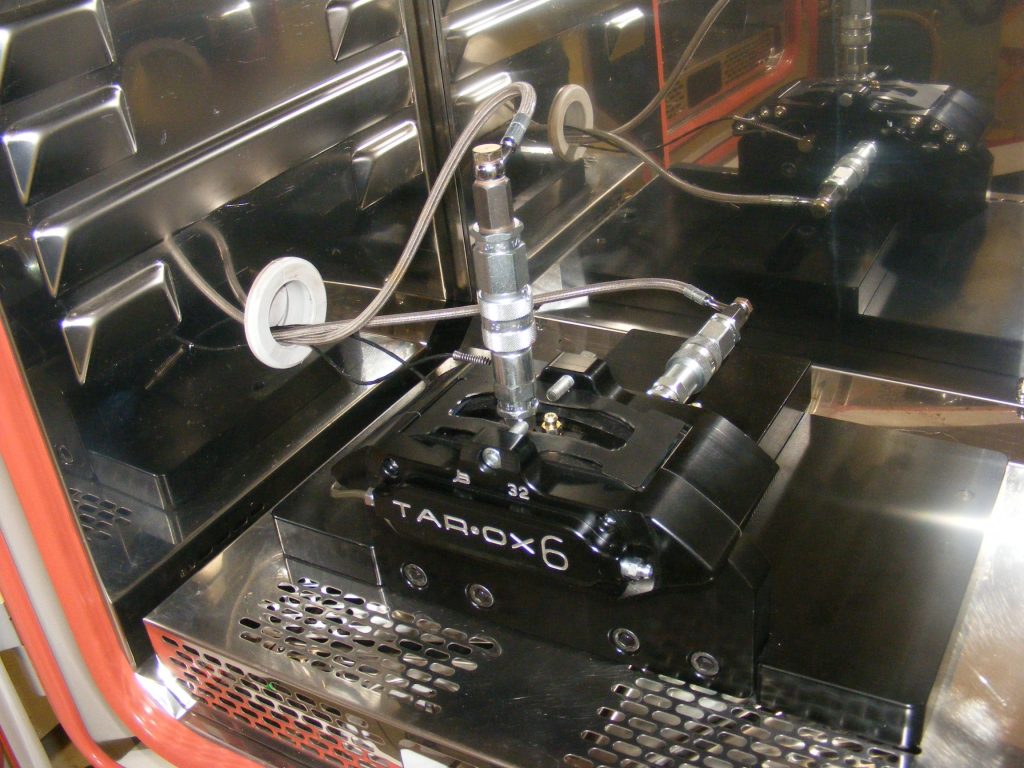 What is it? Issued by the German Ministry of Transport (KBA), ABE certification allows a product to be legally used on German roads. For brake components, ABE is only relevant to discs and pads; (brake kits are excluded because they involve an alteration of the brake hydraulic system). While TÜV test reports and TÜV Gutachten documents require that the part approved is noted in the car paperwork by an approved test station, it’s enough to show the ABE document to the operator when passing the annual inspection. The procedure for obtaining an ABE requires a company to be ISO 9000 certified and KBA approved. The parts are tested on the test bench and on the road. TAROX had its first ABE parts approved in 2008 and, at the time of writing, has approximately 750 codes approved.

What’s important? The German ABE for long time has been the only recognised standard for brake discs and pads.

Anything to look out for? ABE for brake pads is valid for cars manufactured until September 1999 but, for brake discs, it doesn’t apply to vehicles manufactured after November 2016.

We say: ABE is widely accepted outside Germany as a proof of quality for aftermarket parts. 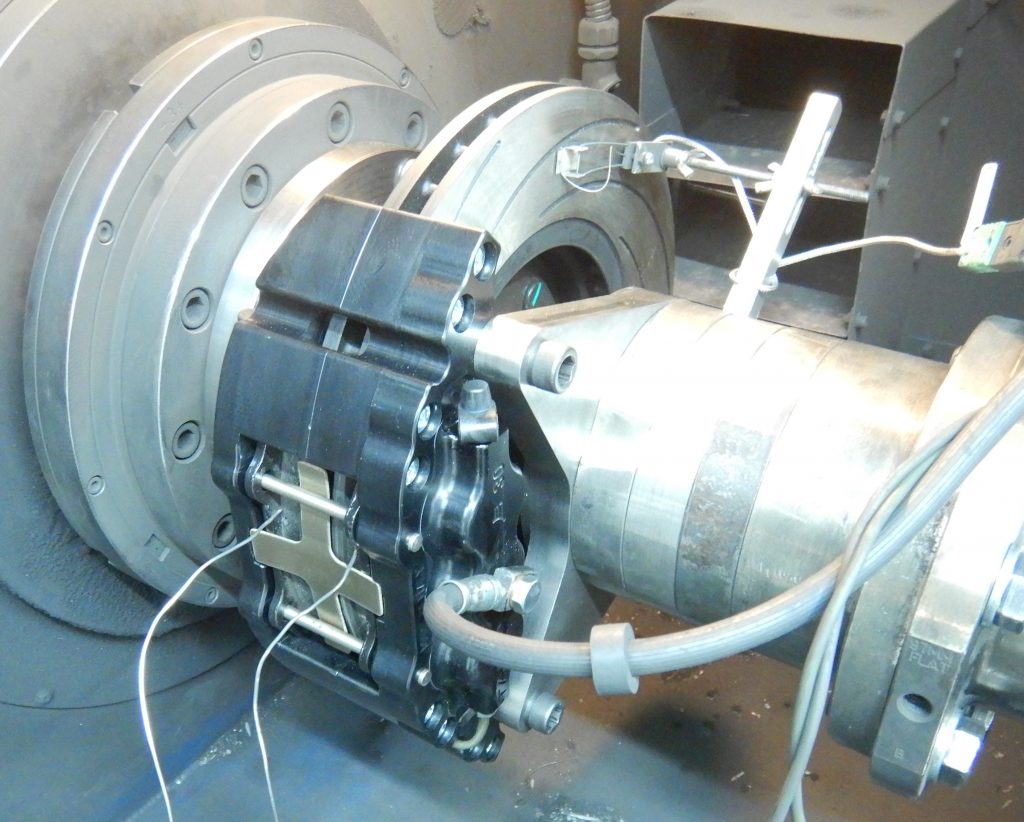 What is it? In force from 1999 for brake pads and from November 2016 for brake discs, a component is only approved if it does not deviate from the characteristics of the original-equipment by more than 15%. The test procedure on the dyno is brutal: 200 stops from a vehicle’s maximum speed down to 20km/h. TAROX recently started a program to approve its range of discs, and passed the first ECE R90 tests in the second-half of 2019. Some of the Strada brake pads range has also been approved.

What’s important? The most rigorous test available for brake discs.

Anything to look out for? Bizarrely, a brake component may be approved for performing 14% worse than OE, but it will fail the test if it performs 16% better.

We say: ECE R90 is a quality standard recognised in 54 countries worldwide.