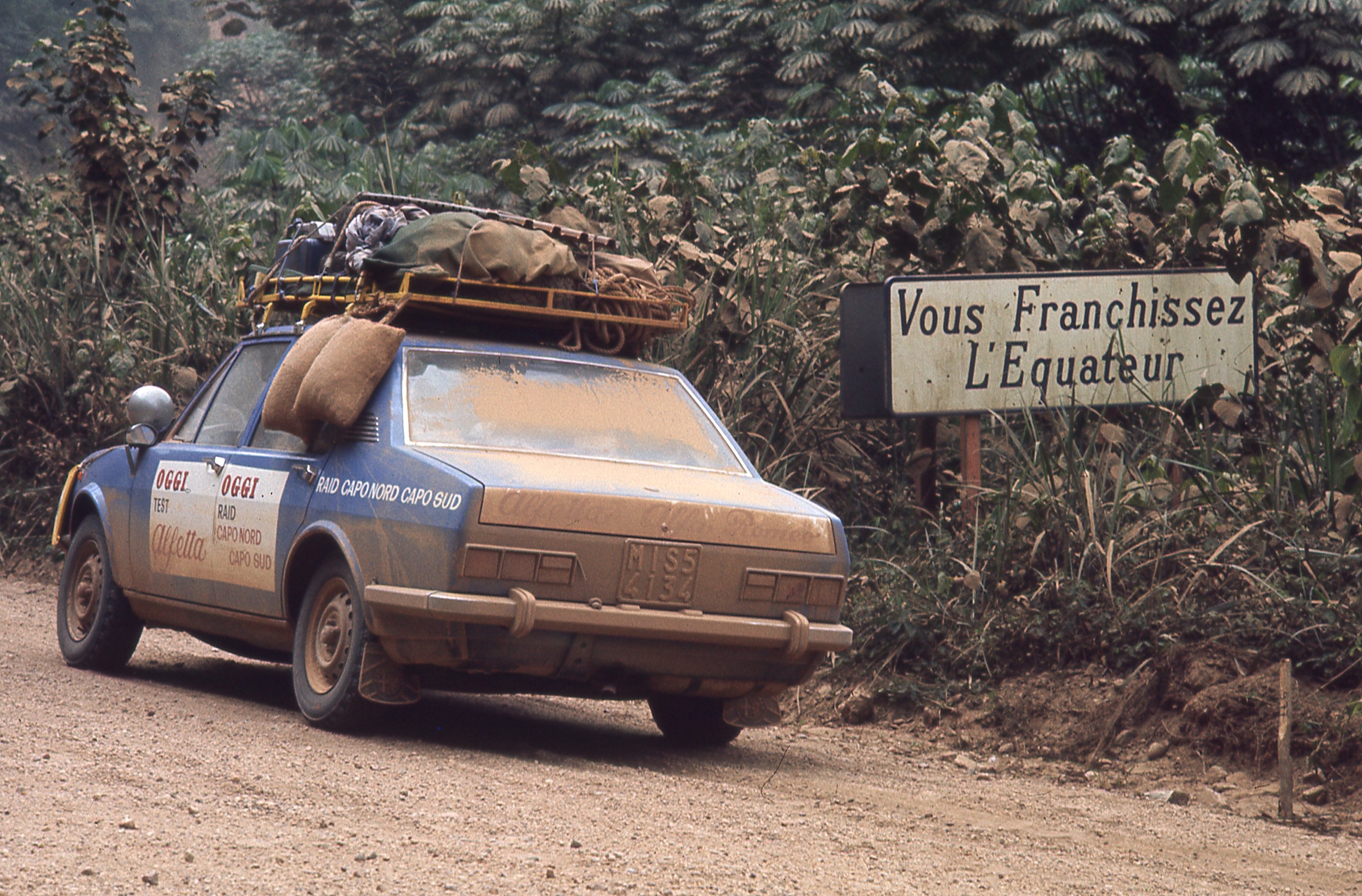 From Cape North to Cape Town: the Alfa Romeo Odyssey

From Cape North to Cape Town: the Alfa Romeo Odyssey

TAROX brakes is a company driven by the passion of founder Gianni Taroni. A race driver, keen adventurer and motorsport engineer, Gianni took product testing very seriously – just as we continue to do today. His most ambitious expedition involved driving some 26,000 kilometers in less than 30 days in an Alfa Romeo Alfetta. The cast includes: the newly released Alfa Romeo Alfetta 1.8, ex Ferrari driver turned photographer Giancarlo Baghetti – known for being the only driver to win a F1 grand prix on his debut – Fabio Galliani, a journalist from the Italian magazine “Oggi” and of course Gianni Taroni himself. 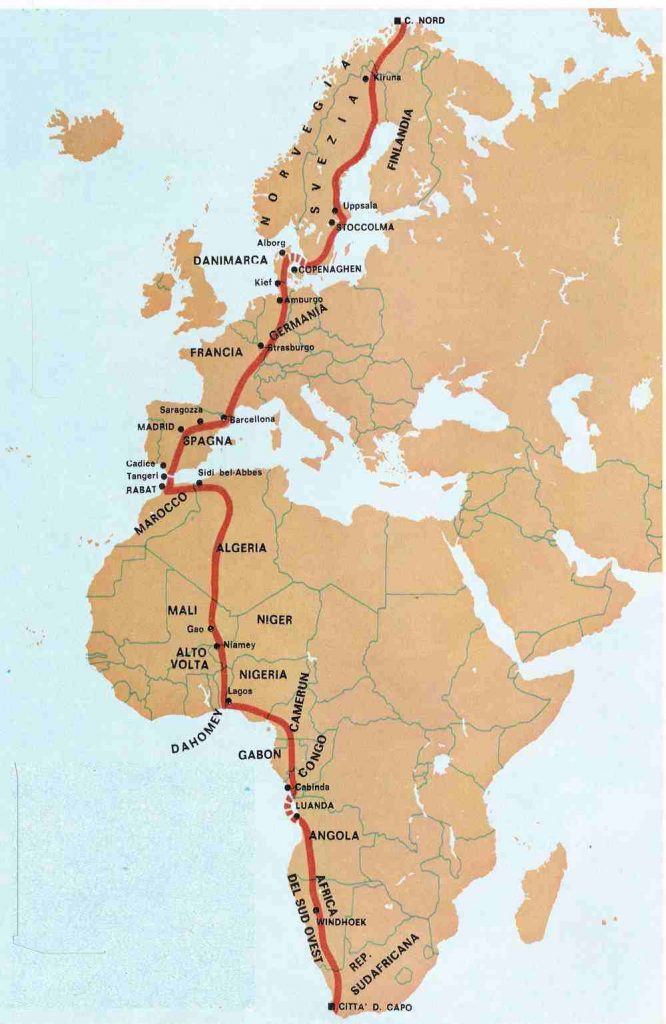 When Gianni Taroni and Giancarlo Baghetti asked Fabio Galliani if he was interested in joining them in the rally raid from Cape North to Cape Town, he thought they were joking. In fact they were very serious and already secured a car for the trip, the latest Alfetta from Alfa Romeo. Alfa Romeo was keen to prove that this latest model was not only fun to drive but reliable too. Success on the raid would certainly prove that. 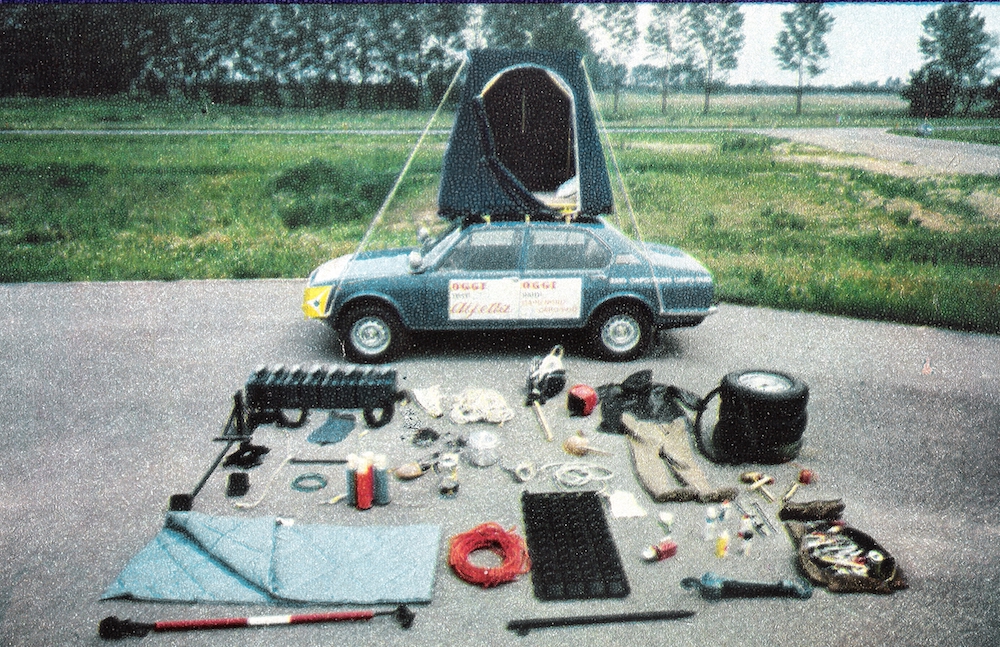 The idea was too tempting to resist and the idea gathered momentum, after only a few weeks to arrange the logistics the trio were ready to go. It was decided that the Alfetta had to be as standard as possible in order to prove the Alfa’s reliability, the only modification was an extra front grill to protect the radiator and lights and an aluminium skid pan underneath. Under the bonnet the original air filter was replaced with an oil bath air filter to prevent the dirt and sand to get into the engine, standard fair for vehicles looking to embark on an expedition like this. 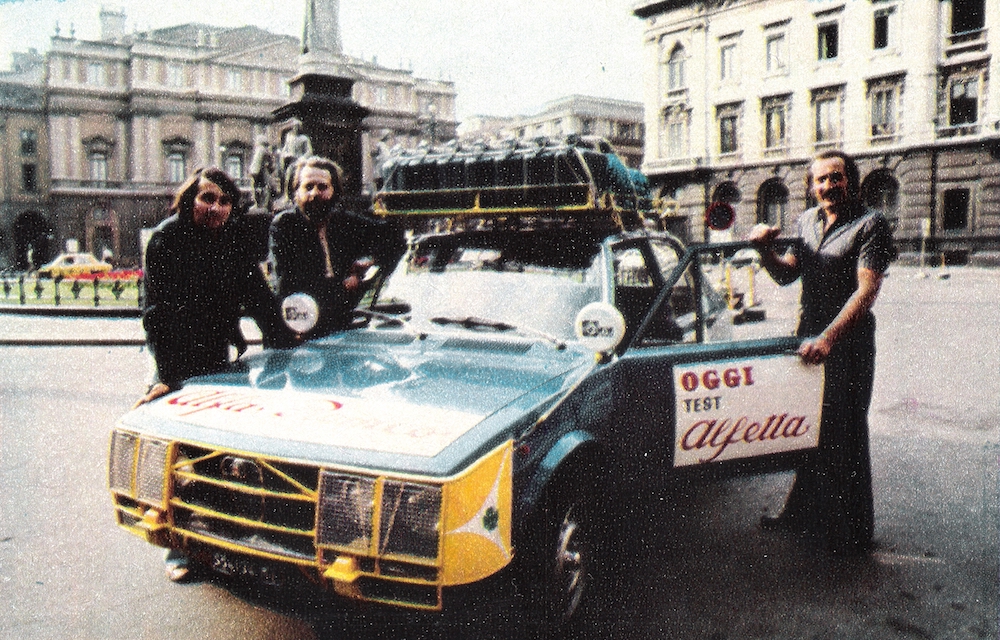 To complete the trip the Alfetta was loaded with basic spares and supplies. Three spares wheels, eight fuel tanks and food for at least 15 days came to additional 500 kg of extra weight, without the weight of the three travellers. Fully laden, they were set to go. The journey started from Cape North, a 300m high giant terrace. Just 1800 km of Artic Sea separated them from the North Pole. “It was summer but temperature was -2 C” notes Galliani. “Cape North is on an island, 30 km of gravel road in a barren landscape without vegetation taking you to the ferry that takes you to the continent.” Lapland is Europe’s desert; the journey began with hundreds of miles of wasteland “under the milky sky of an eternal day in the Artic Summer”. 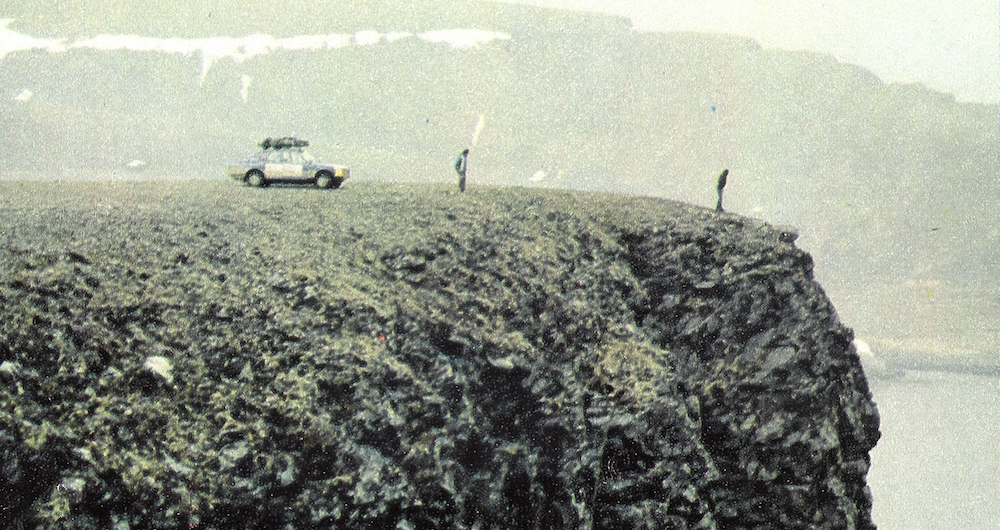 Lapland roads are bad to say the least, with a few thousand KM ahead Baghetti and Taroni set a frantic pace, despite the unpaved road the trio rarely dipped under 130 kh/h. 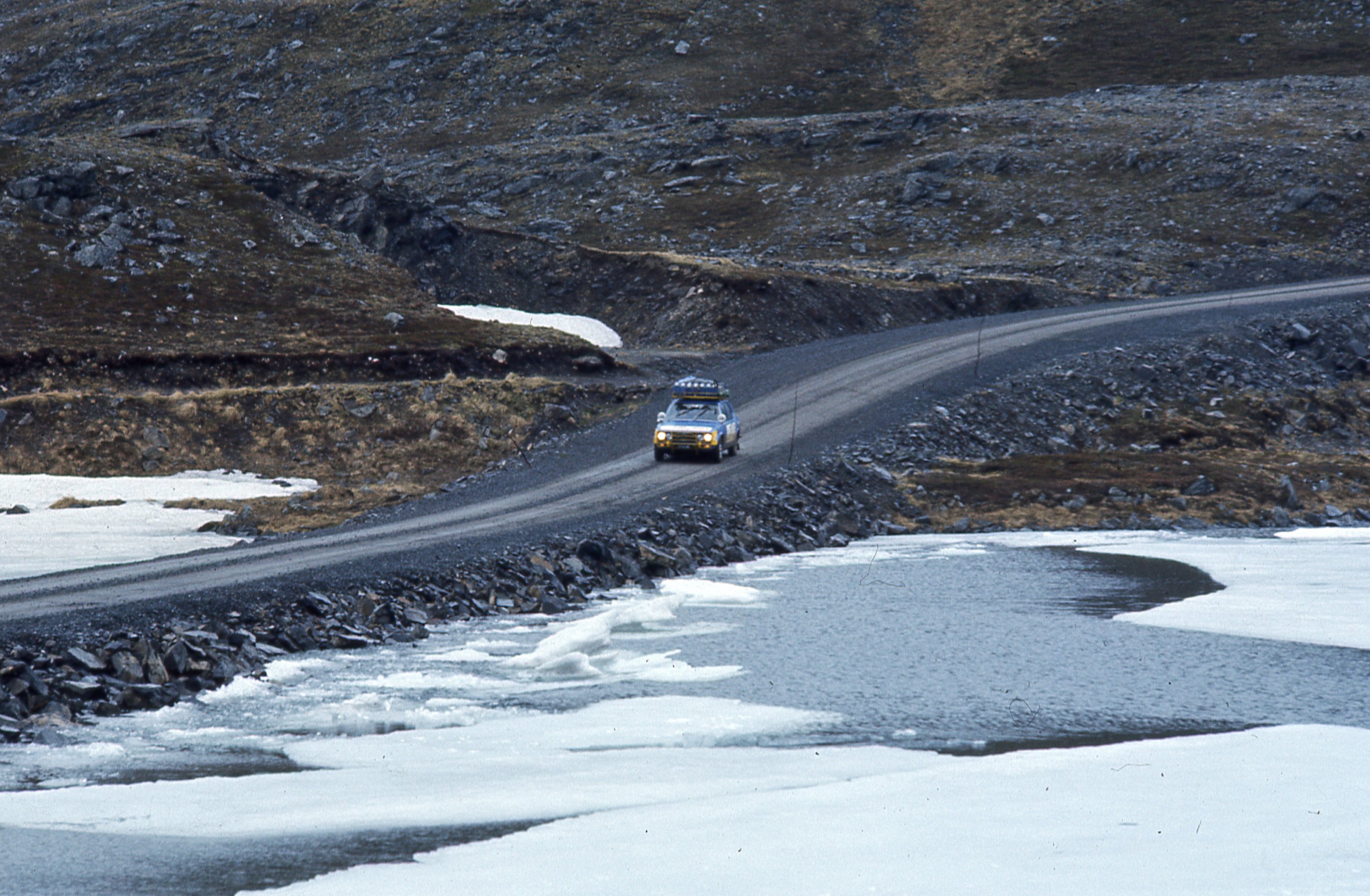 “If we have to get to the destination in good time we have to put the foot on the floor – mused Baghetti. At the end of each day there is always more daylight”. This was captured at Kautokenio at 1.30 a.m in the midst of the polar summer, when the sun just does not want to go down. 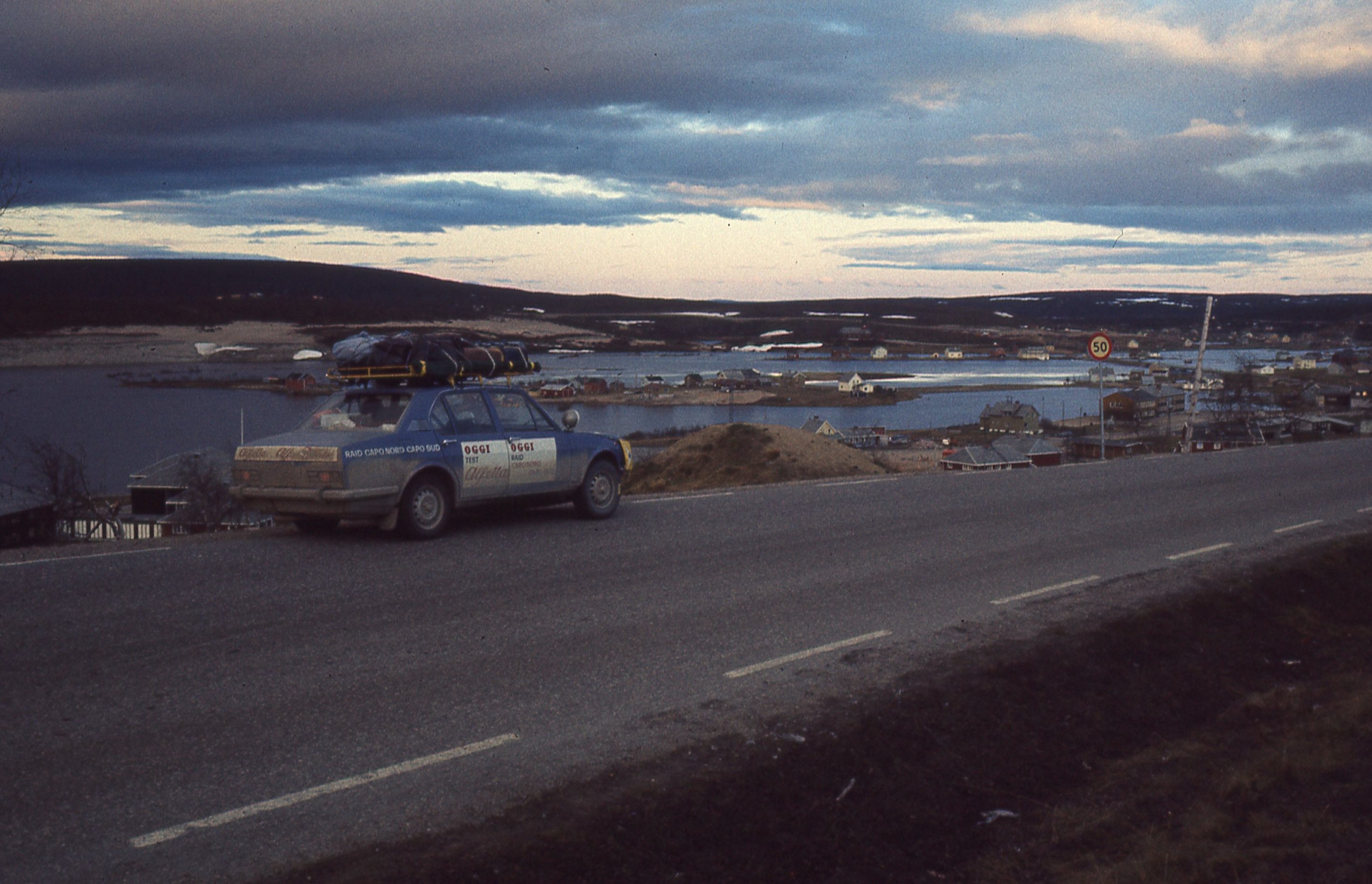 From Kautokenio, Lapland to Siville, Spain it is all tarmac roads and the two drivers made the most of it, clocking up 5738 km in just 4 days and 3 nights driving through Denmark, Germany and France. There was no need to stop for sleep; one driver could rest while the other one is at the wheel. With the supplies on board they made just three stops for food. Despite the speed at which the adventurers travelled the route there was always time to document the trip before boarding the ferry to Tangiers, Morocco, where expedition would get much more interesting… 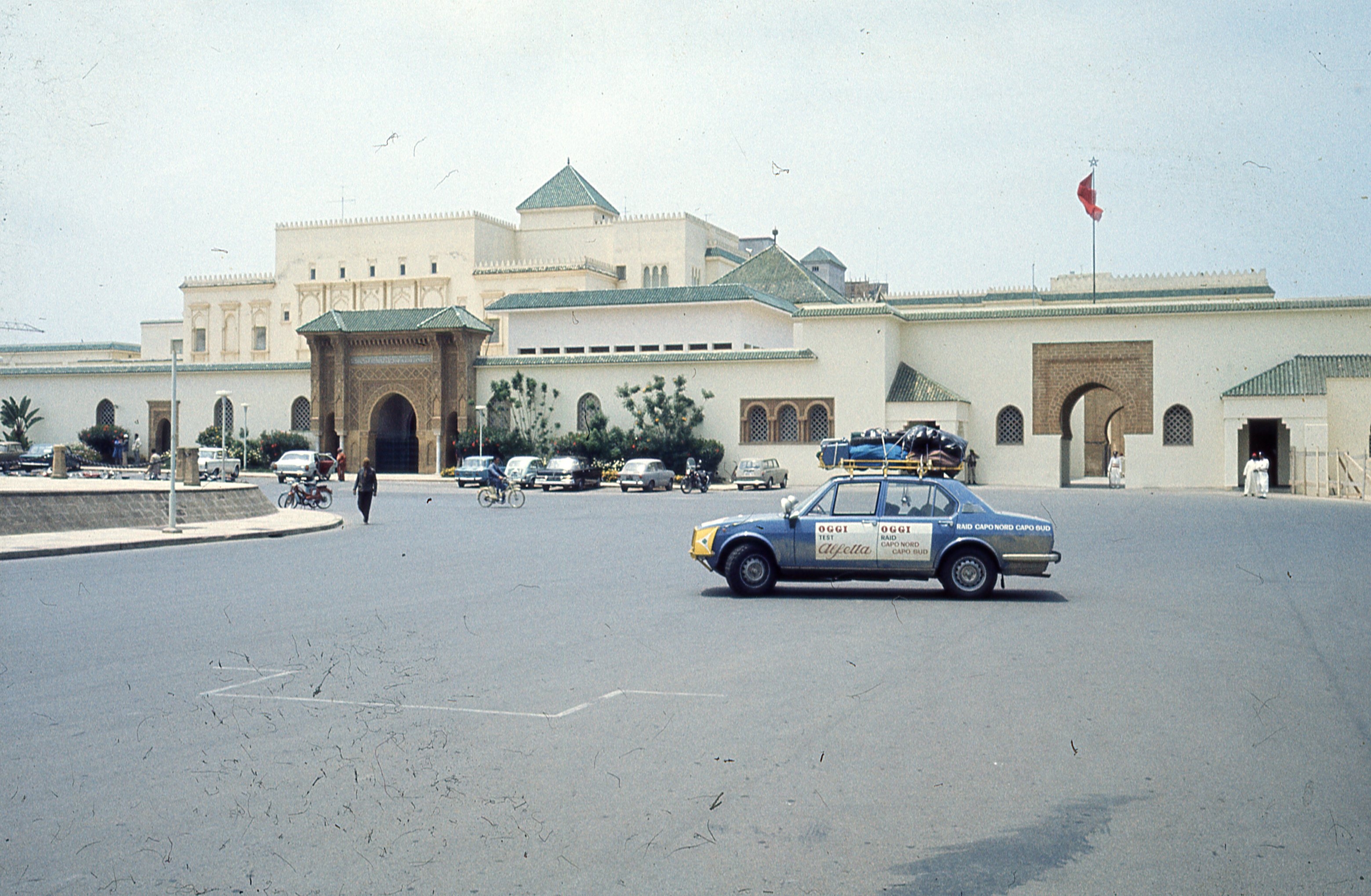 From Tangier to toward Algeria via Fes e Meknes and then going south is where the landscape begins to feel like the Sahara. With a lack of hotels and places to stop on this leg of the journey they had to sleep where they could. The harsh desert was fast approaching but they were still travelling on a thin strip of tarmac. The strong desert wind creates a perpetually changing landscape and often covers the road surface with shifting sands. This creates a unique navigation challenge, making it very easy to lose your way. 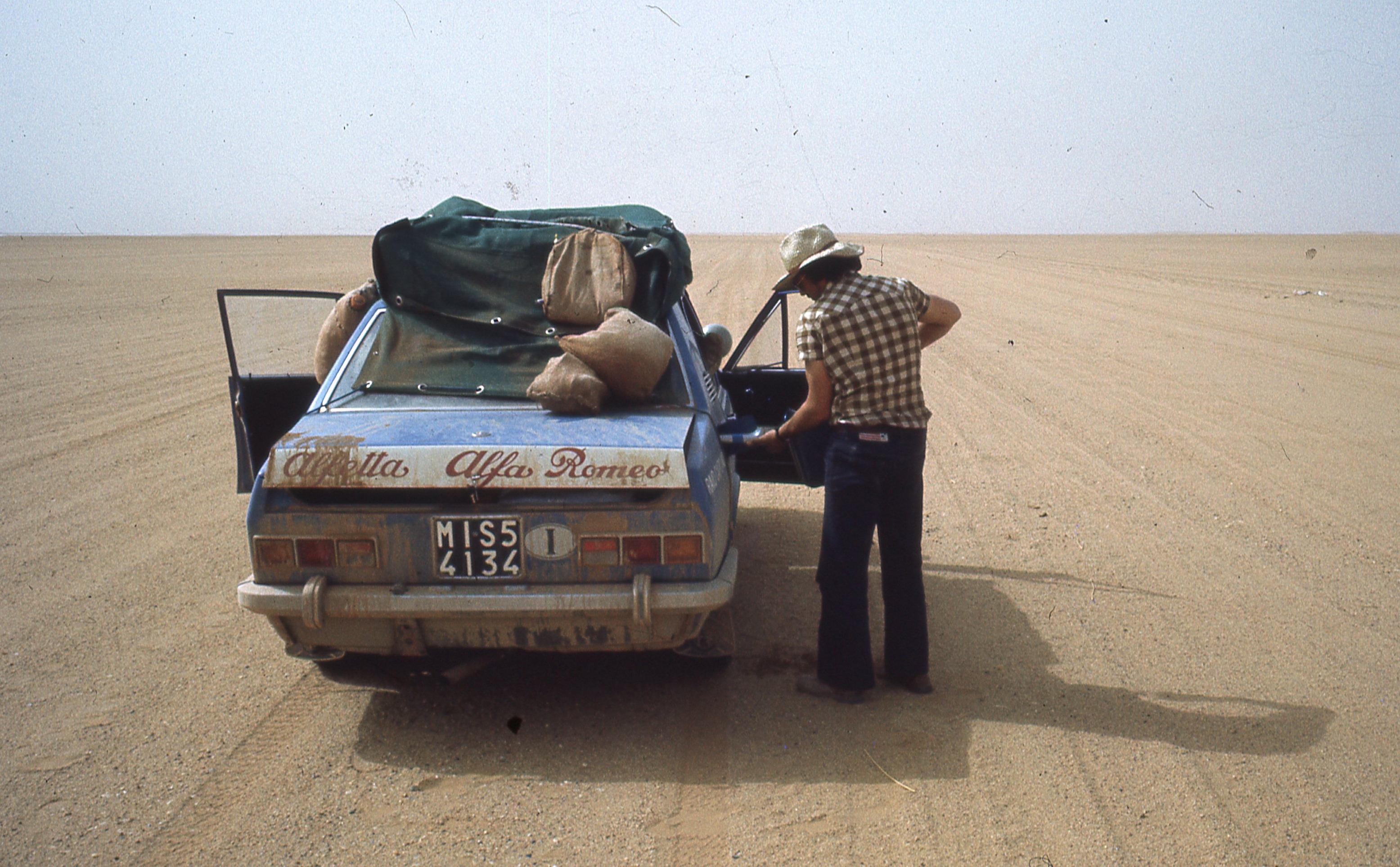 El Golea, 2242 km from Tangiers, is the gate to enter the Sahara desert. The strong winds prevented the little Alfetta from crossing the desert via the main route through Tamanrasset. The alternative was to cross the notorious Tanezrouft, also known as the “Land of Fear”. Local authorities would only allow the trio to pass through with a convoy of other vehicles and it is not hard to see why: “after the tarmac road end at Adrar you face 1500 km of flat road where not even scorpions manage to live and where the track keep disappearing, beaten by the wind. You only meet remains of animals, left by convoys transporting them to Mali in winter”, notes Galliani.

In the desert it is easy to lose the way and it is not uncommon to find carcasses of cars as well as animals. The trios event log notes that “temperatures reach 65 degrees C in the day, night gives us some relief but never lower than 30C”. 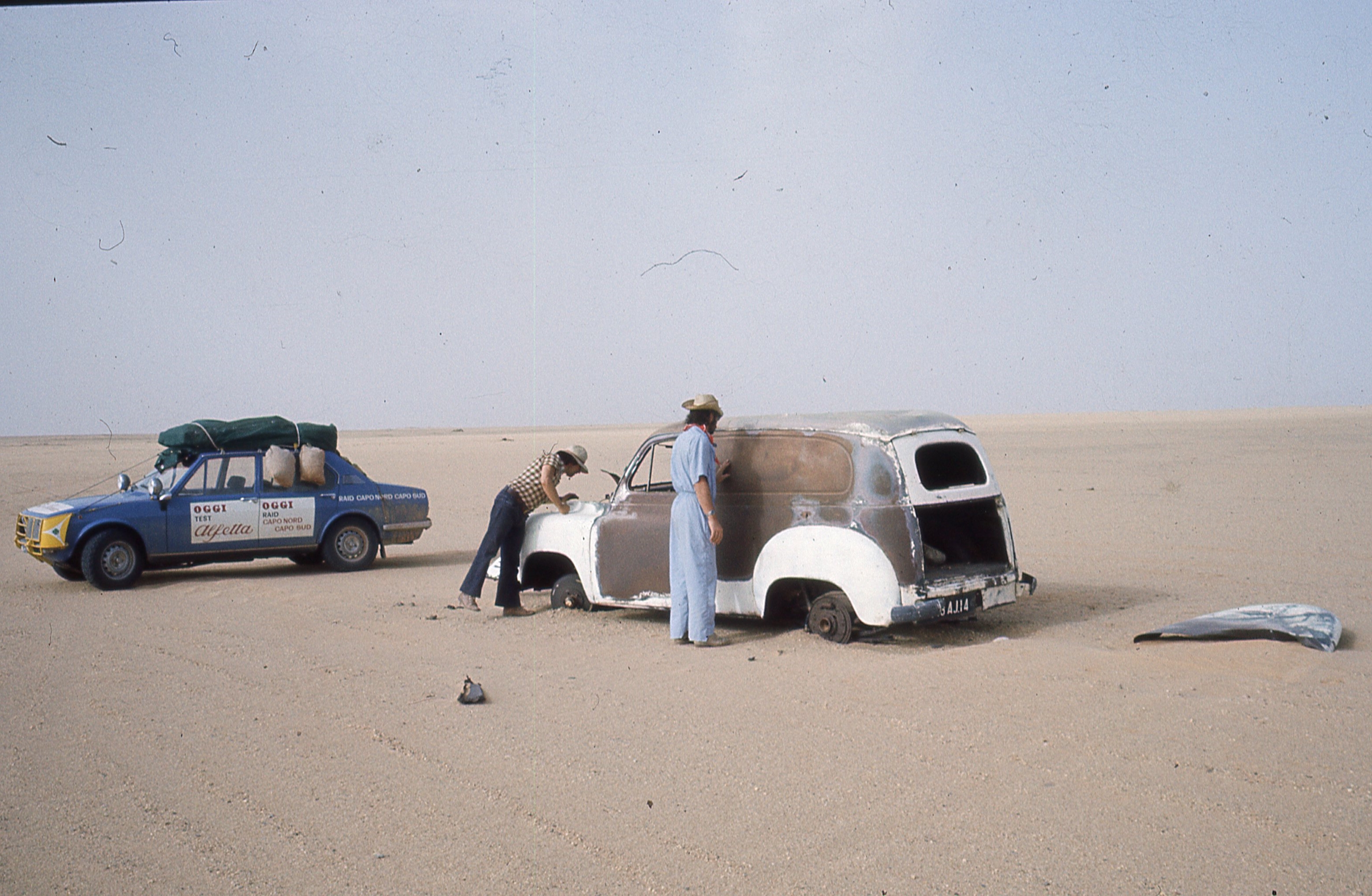 The Sahara desert ends at the gate of Gao in Mali; it took 12 days to cross the desert and the region immediately after, the Sahel, was not much of an improvement. Plagued by a lack of water supply life for the Touareg, the local people in this area, is very very hard indeed. 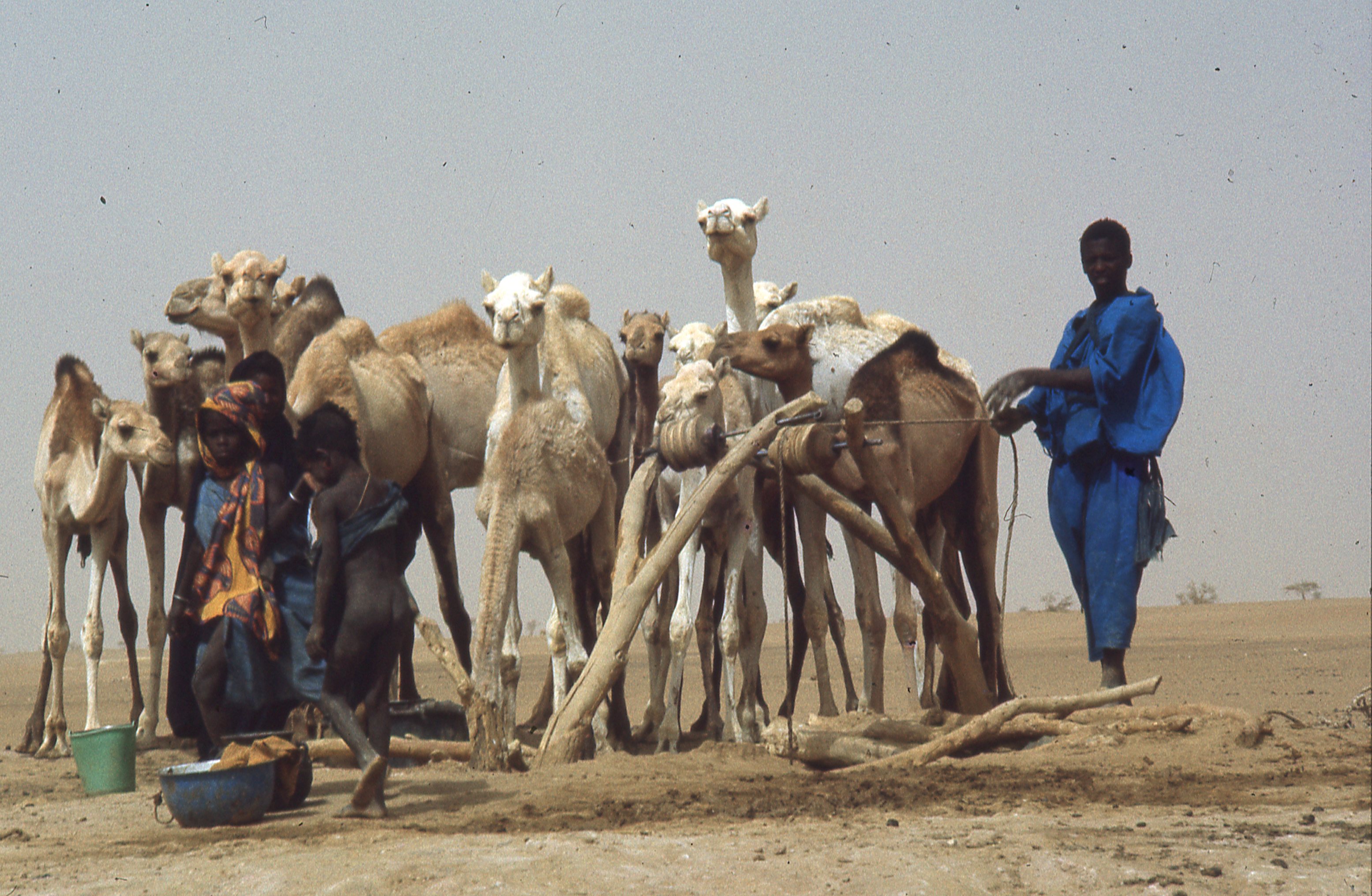 Still the road surface deteriorates, the journey continues, still time to get the car stranded again. 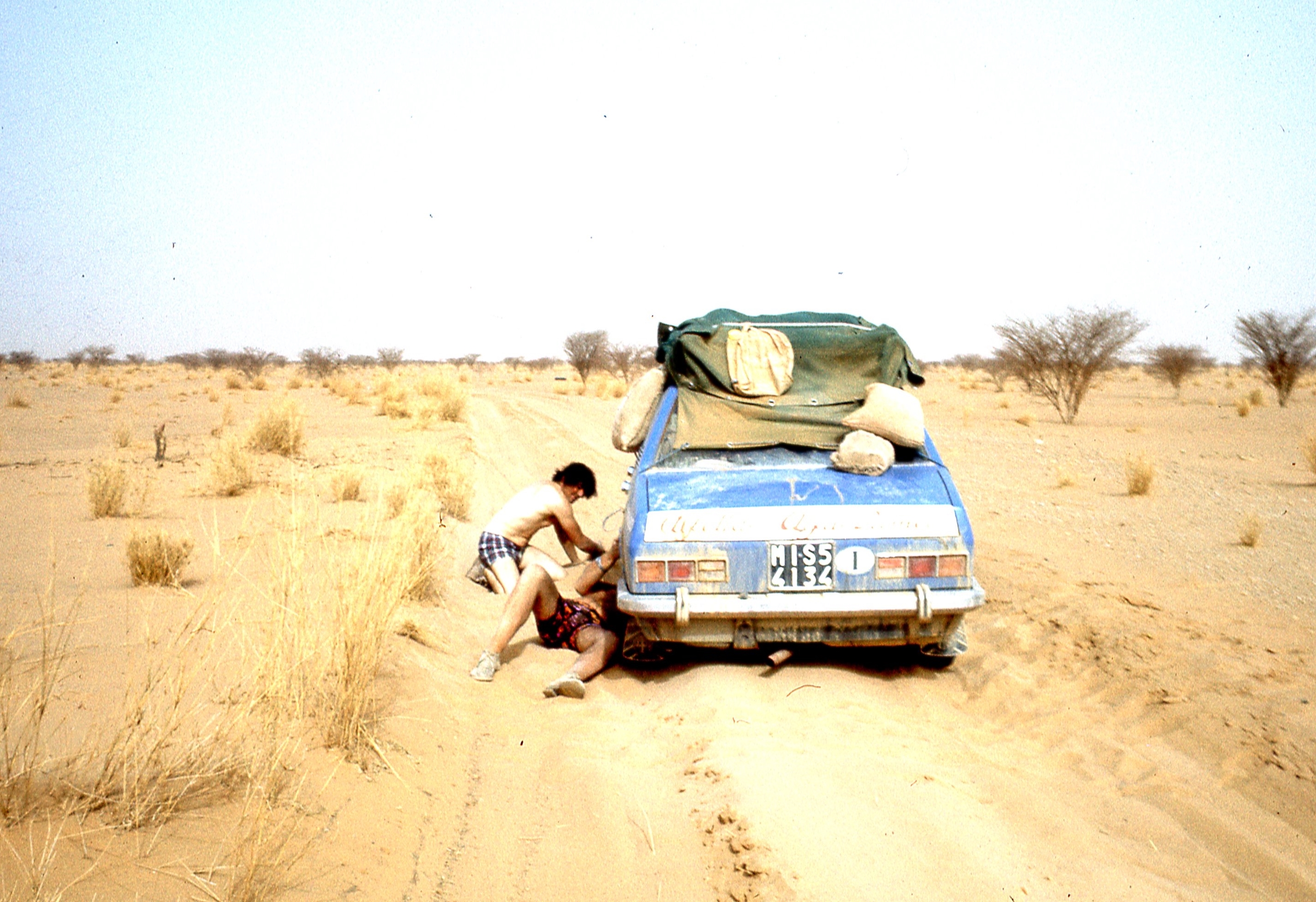 After the desert there was 5000 km of unpaved road to tackle, sometimes where the track was completely invaded and covered in vegetation or was a bumpy, dry riverbed. This leg of the journey was the toughest yet. The pace was still impressive though, as Galliani notes on his diary: ” Baghetti and Taroni never let the foot off the throttle. Besides, it is either to risk (the car) or go at 25-30 km/h and you cannot travel at 30 km/h for thousands of kilometres”. The relentless heat and rough terrain were not the only adversaries for the explorers however, a much more dangerous condition was on the horizon. “In Dahomay, Niger, Nigeria, Camerun and Gabon we crossed the forest, racing against the great rains. It was a race against the weather. The rain was chasing us. Had it caught up with us we would have to stop because the tracks in the forests become little creeks, and nobody can go through”.

When approaching a flooded road, Gianni would climb down from the car and check the ground condition to find the shallower point where the Alfetta could negotiate a low risk crossing. “We learned that in Africa the road maintenance is non existent. It is incredible that the Alfetta resisted such a ‘massacre’. We just broke one shock absorber and this was the only mechanical trouble” Needless to say a European car like the Alfetta attracted a lot of attention through Africa; ” in Congo, where wives are purchased, we were offered for the car 60 girls to be chosen among the prettiest ones of the village!” notes the travel log.

Arriving in Angola, at last the trio started seeing some of the wildlife Africa is famous for. Time was taken to take some shots of the animals; it was a once in a lifetime experience. “We had started worrying we would get back home from Africa having seen only camels, actually dromedaries . In fact we raced the Alfetta with Zebras. We parked ourselves among the lions. We rode on ostriches and encountered monkeys and giraffes.” 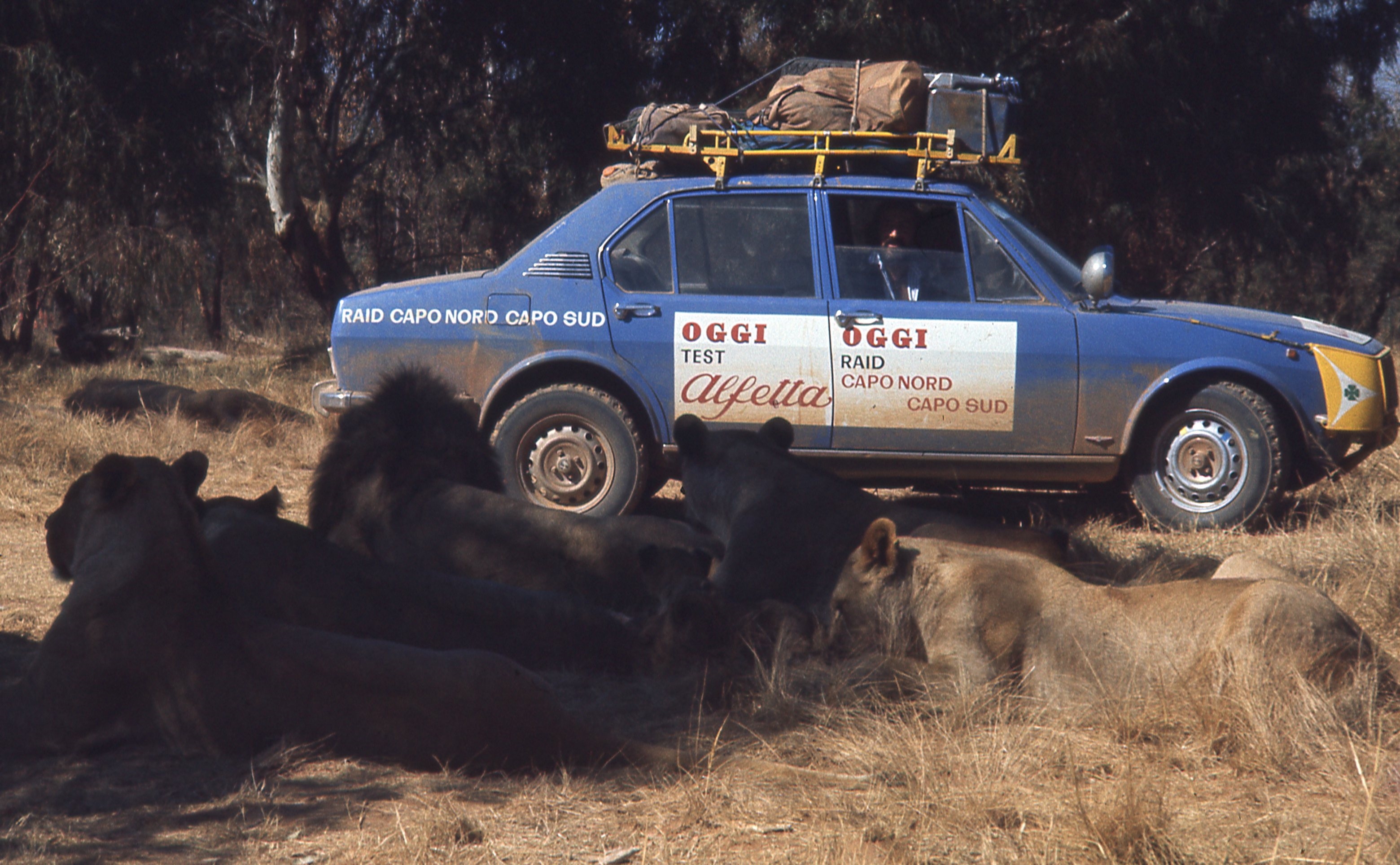 “From when we left the tarmac road in northern Africa until we reached Luanda in Angola we drove 8212 km on the most challenging tracks of the world. The Sahara desert, the Savannah and the great tropical forests. It is not possible to compare with any other trek.” It can be said that 8,000 km out of almost 30,000 km is not a big deal but Galliani’s definition for this portion of the trip was ” a massacre”. ” Baghetti and Taroni are not among those who spare the car: otherwise how could we have done more than 26,000 in 29 days, including clearing customs in 29 countries and transfer on ferries?” Driving through Angola and South Africa on the tarmac is plain sailing, just the time to shoot a gigantic baobab tree and then final picture at the destination where the Alfetta is at the very end of the African continent. This is where Indian and Atlantic oceans merge their waters: you cannot go further than that. Once the mission was accomplished it was time to draw some conclusions: “What we wanted to demonstrate is that with a car like the Alfetta, you can go anywhere” 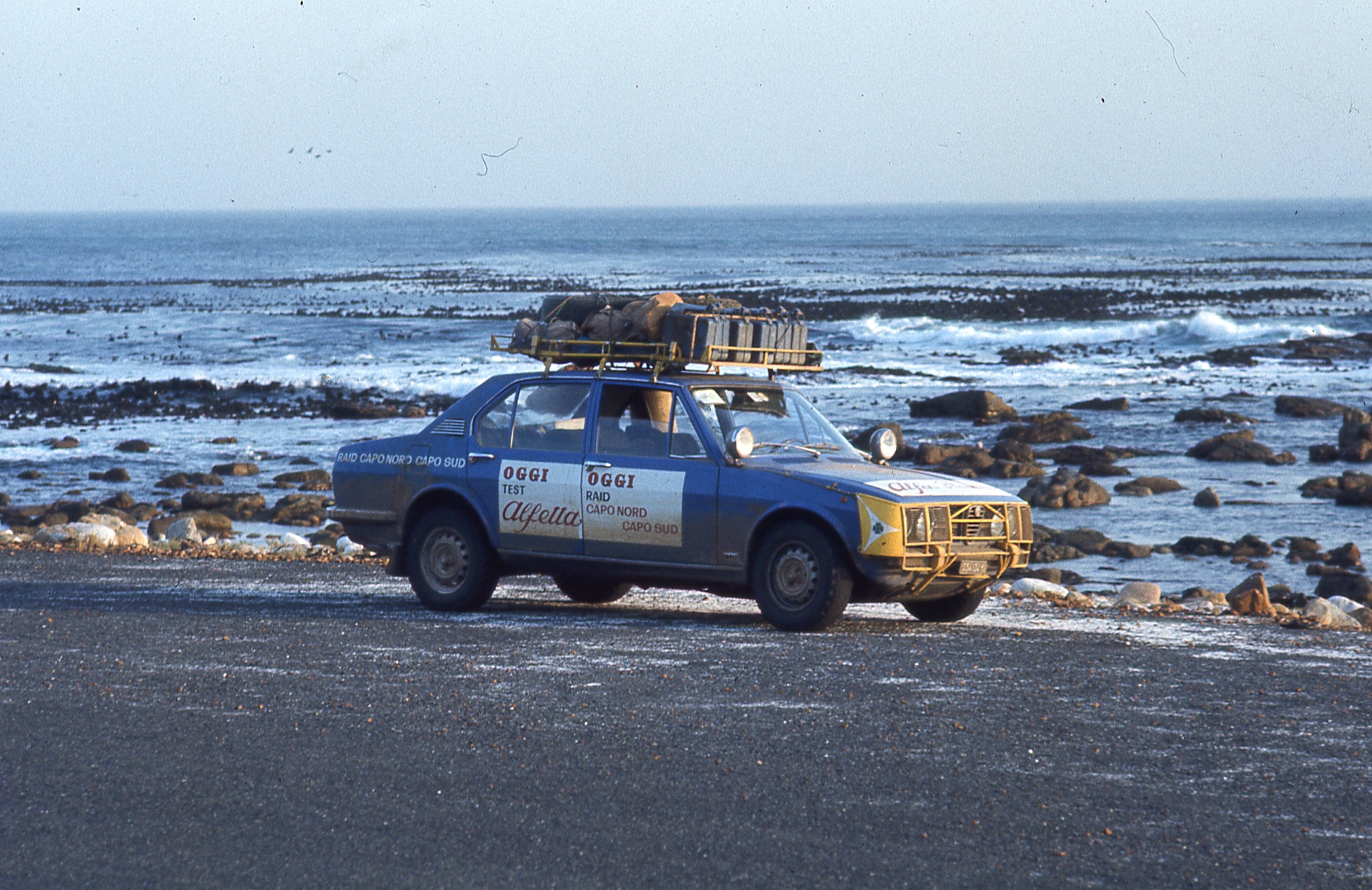 The Alfetta was a car born to be used on European roads, designed to go fast through the most challenging bends and was not supposed to be used as a Land Rover. “I think than nobody has ever given a beating to a car like Taroni and Baghetti did to the Alfetta” – concluded Galliani.” That is why this test was particularly significant, Taroni and Baghetti did not spare anything to the Alfetta, and on the contrary they always pushed it to the limit to see if it could be broken. But it did not fail.”